The Pittsburgh Steelers defeated the Philadelphia Eagles 38 to 29 to open their season with a 4-0 record. As commentators quickly noted, the last two times the Steelers opened 4-0, where 1978 and 1979 – seasons that ended with Lombardi Trophy presentations in Super Bowl XIII and Super Bowl XIV.

That’s an encouraging trend, but the way in which the Eagles game unfolded reveals that the 2020 Steelers still have much to improve upon if they’re to emulate the Super Steelers. 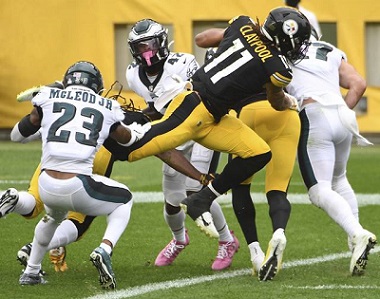 There’s a reason why you play games on the field instead of simulating them in Madden, and Eagles game shows why. Pittsburgh and Philadelphia both brought aggressive, quarterback harassing defenses into the game.

Nope. During the final 20 minutes of the first half, the Steelers and Eagles alternated between 5 straight scoring drives. Officially, the Steelers got in the last word with Chris Boswell’s field goal, but the Eagles reached Pittsburgh’s 12 with an impressive two minute drill and would have scored had time not expired.

The first half’s “expect the unexpected” theme carried over until the end of the 2nd half.

Even when Mike Tomlin’s Steelers have been at their best, they’ve still struggled to put teams away. To their credit, the Steelers began the 2nd half against the Eagles determined to land that knockout blow. 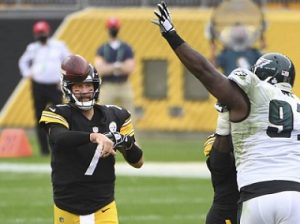 After feigning with a few chink-and-dink passes, Randy Fitchner dove right into his bag of tricks with jet sweep to Ray-Ray McCloud who streaked for 58 yards down to the Philadelphia 5. Two plays later, Fitchner was at it again when bunched Vance McDonald, Trey Edmunds and James Conner to the weakside only to have the trio act as blockers instead of receivers as Ben Roethlisberger hooked up with Chase Claypool for his 2nd touchdown of the day.

Steven Nelson ended the Eagles next drive after just two plays when he reclaimed possession for Pittsburgh at Philly’s 23 by picking off Carson Wentz. A quick pass to JuJu Smith-Schuster brought the Steelers to the goal line where James Conner marched into the end zone behind Kevin Dotson.

The Steelers had gone up by 17 points by scoring a touchdown, securing a turnover, and transforming that turnover into another touchdown. Mike Hilton opened the next series by sacking Carson Wentz to put Philadelphia further behind the 8 ball and barely 5 minutes had elapsed in the first half.

Finally it seemed, Pittsburgh had landed a knockout blow….

….Except they hadn’t. Two plays later, Carlton Wentz converted a third down by finding Travis Fulgham for a field flipping 31 yard gain. A pass interference penalty on Joe Haden put the Eagles in the Red Zone, setting a Philadelphia touchdown and two point conversion that was all too easy.

Carson Wentz and Travis Fulgham continued to use and abuse the Steelers secondary and scored on their next possession, cutting the Steelers lead to two. The Steelers responded with a workman like, clock consuming drive, but unfortunately Eric Ebron scuttled it by coughing up the ball to the Eagles at mid field with 6 minutes left.

Not only had the Steelers failed to knock out the Eagles, they appeared to be supplying them smelling salts….

Chase Claypool Closes It for Steelers, But Cleveland to Offer True Test

Fault the Steelers for letting the Eagles back into the game, but slamming the door shut with fantastic efforts on both sides of the ball. They also had help from Doug Pederson who tried a failed 57 yard field goal – towards Heinz Field’s open end no less – rather than punting to pin the Steelers inside their own 20. 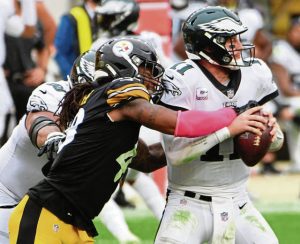 Philadelphia seemed poised to get another shot as the Steelers quickly found themselves at 3rd and 8, but Ben Roethlisberger saw linebacker Nathan Gerry lined up over Chase Claypool in the slot, called an audible and watched Claypool slice through the middle of the Eagles secondary for a 35 yard touchdown that put the Steelers up 38 to 29.

Carson Wentz tried to rally the Eagles for one final last gasp, but the Steelers answered with a Bud Dupree sack, a T.J. Watt pressure and another Steven Nelson interception.

But all is not rosy. Against the Eagles, the Steelers defense again proved it can end drives with Splash plays when necessary. But that same defense is also giving up just under 13 yards every time a pass is caught. As Jim Wexell points out on Steel City Insider, those are numbers characteristic of bottom feeders rather than championship contenders.

On the flip side, rookie Chase Claypool became the first Steeler since Roy Jefferson to score four touchdowns in one game, establishing himself as a difference maker. Can Claypool become a consistent enough weapon to make up for a drop off in defense?

Time will tell, the Steelers certainly cannot be complacent when Cleveland comes to town next Sunday.

2 thoughts on “Chase Claypool Arrives in Steelers 38-29 Win Over Eagles. Can He Off Set a Defensive Drop Off?”