Taken from the grade book of a teacher who hopes his class realizes that 8-0 does not equal perfection, here is the Pittsburgh Steelers Report Card for the win over the Dallas Cowboys. 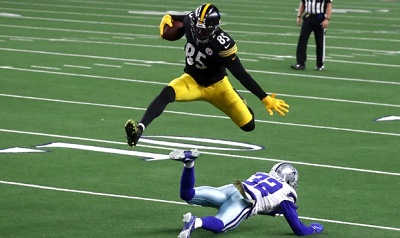 Quarterbacks
Ben Roethlisberger struggled, again, for much of the first 30 minutes and was completely ineffective. Then he came alive to lead 3 touchdown drives all while protecting the ball. Roethlisberger remains unable to connect with receivers deep. Mason Rudolph came in at the end of the first half and looked like a QB doing mop up work when more was warranted. Grade: B

Running Backs
James Conner, Benny Snell and Anthony McFarland all saw action. None of the men were particularly effective rushing the ball, and James Conner’s two catches lost yards. The running backs didn’t get much help rushing the ball, but you’d still like to see more. Grade: C-

Tight Ends
Eric Ebron only caught 3 passes for 22 yards but one of those was for the go ahead touchdown. Vance McDonald caught 1 pass for 2 yards. Grade: B

Wide Receivers
JuJu Smith-Schuster continues to prove his worth with 9 catches for 93 yards and a tough touchdown. James Washington hasn’t been asked to do much this year, but he’s delivered when called upon as he did when scoring the first touchdown. Diontae Johnson had 6 catches for 42 yards. Chase Claypool had 8 catches for 69 yards but slid with the Steelers needed a first down. Grade: B

Offensive Line
On the plus side, Ben Roethlisberger was not sacked and only hit twice, although he got injured on one of those hits. On the negative side, the Cowboys run defense completely smothered the Steelers rushing offense. That created long third downs and forced the Steelers to be one dimensional in the 2nd half. This must not continue. Grade: C- 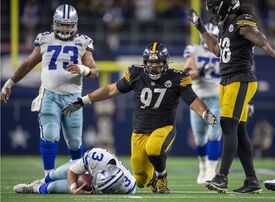 Defensive Line
Look at the stats and you’ll see that Cam Heyward only had a half sack and a tackle and a half for a loss. But that sack he split was a monster play that should have ended the game. Stephon Tuitt had four tackles and one for a loss. Isaiah Buggs and 3 tackles and Henry Mondeaux had one that went for a loss. Dallas didn’t run over the Steelers, but they did better than they should have. Grade: B

Linebackers
Robert Spillane had 8 tackles. T.J. Watt might have “only” split half a sack with Heyward, but he had 3 QB hits and batted 3 passes down. Bud Dupree had a tackle and a QB hit. Alex Highsmith continues to see his playing time increase and had 3 tackles and a sack. Dallas had more success converting third downs than they should have. Grade: B

Secondary
The Cowboys made some long completions, but overall Joe Haden, Steven Nelson and Terrell Edmunds had solid games. Cam Sutton forced a fumble. But the real star of the game was Minkah Fitzpatrick, whose fumble recovery set up a field goal and whose interception took at least a field goal off of the board for the Cowboys, while setting up another Steelers field goal – that’s a nine point swing. Which doesn’t even factor in his final pass deflection. Grade: B+

Special Teams
Where to start? The Steelers got suckered on a lateral during a punt return. OK. That’s understandable if not excusable. But Chris Boswell placed the ball exactly where he wanted to and Dallas still got a 64 yard kick return. Now throw in a missed extra point, a missed field goal and a blocked extra point. Easily the worst day ever for a Danny Smith-coached Steelers special teams unit. Grade: F 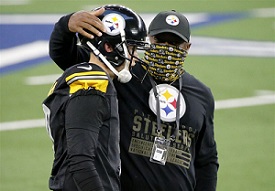 Outside of Derek Watt, he hasn’t lost any starters, yet he continues to start slowly. The Steelers struggle to establish the run, while the deep ball fails to be a factor. But like Butler, Fichtner continues to make adjustments on the fly, and while the Steelers offense might be “boring” it is putting points on the board when it counts.

Being smart enough to realize you don’t know everything is a virtue in life and the NFL and it is one that Tomlin possess. Grade: B

Unsung Hero Award
The “usual suspects” on the Steelers defense made ESPN highlight-reel Splash Plays. And make no mistake about it, those plays were critical to the game’s outcome. But so were bread-and-butter plays turned in down after down, and no one epitomized that more than the defense’s leading tackler who dropped two players for losses, which is why Vince Williams wins the Unsung Hero Award for the win over the Cowboys.