During the 21st century, Steelers and Ravens have delivered the very best football that the AFC can offer. Proponents of the Tom Brady vs Peyton Manning narrative will protest, but they will be wrong.

The Steelers 28-24 win over the Ravens at M&T Bank Stadium lived up to the rivalry’s pedigree. The win improved the Steelers standing to 7-0 alone atop the AFC North. But what’s perhaps most encouraging about the win is that in leading the comeback, the Steelers signal caller showed something that we haven’t seen thus far in 2020. 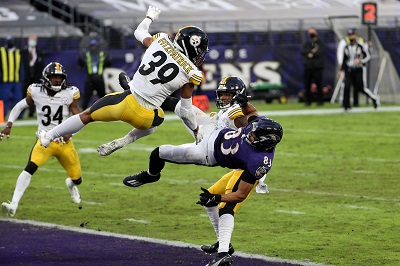 1st Half: No, A Win over the Ravens Really Couldn’t Come So Easily

The Steelers have already had marquee showdown with an AFC North Rival, the Browns. That game started with a pick six authored by all-world safety Minkah Fitzpatrick 3 plays into Cleveland’s first drive. And so did this one.

This time the hero was unsung inside linebacker Robert Spillane, who took it to the house from 33 yards out with less than a minute elapsed in play. 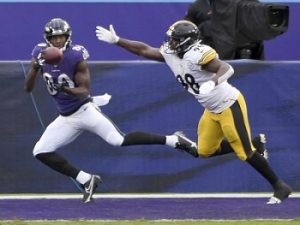 Alas, it would not, and could not.

Following the lead of Lamarr Jackson, the Ravens did everything that opponents haven’t been able to do to the Steelers thus far in 2020:

Sure, the Ravens had their hiccups in the first half. Bud Dupree stripped the ball from LaMarr Jackson when the Ravens were in the Red Zone, but 5 plays and a mere 18 yards later, Jordan Berry was out punting it away for Pittsburgh.

Justin Tucker split the uprights from 51 yards away as time expired to close the first half.  The Ravens held a 17-7 lead over the Steelers, but Baltimore was in full control of the game, and nobody held any illusions to the contrary.

Big Ben Delivers on What He Does Best

The Baltimore Ravens had rendered Ben Roethlisberger ineffective in the first half. The Steelers had logged just 20 plays and pass interference penalties seemed their offense’s most potent weapon. JuJu Smith-Schuster started the Steelers 2nd half off right with a 24 yard catch but, true to form, the Steelers were punting three plays later.

After a 1 yard James Conner run, Ben Roethlisberger and Eric Ebron hooked up to take advantage of a miscue by former Steeler L.J. Fort for an easy touchdown. Suddenly, the Steelers were only down by 3, contesting control of the game. 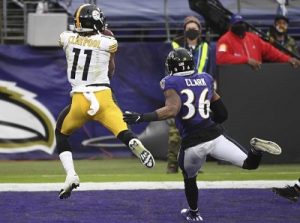 As he told Chris Admanski of the Tribune-Review, “I know everybody says, I do well in playground, backyard football. Today it was in its truest form.” And today at least, playground Ben meant Big Ben at his best as he connected with:

Statistically speaking this wasn’t the best day for Keith Butler’s defense. He saw his unit lose Tyson Alualu and Cam Heyward, which can’t have helped as the Ravens ran up over 265 yards on the ground on the legs of J.K. Dobbins and Gus Edwards. Willie Snead IV added 106 yards and a touchdown through the air in a game that saw the Ravens convert 8 of 15 third downs.

But this tale is being told in Reality Football terms where outcomes are fought out in the trenches instead of spreadsheets. And so it was, with 3:48 left to play the Ravens reached the Steelers Red Zone.

James Conner and Diontae Johnson did manage to get the Steelers to 3rd and 1, but the Ravens held. Fortunately, Jordan Berry boomed off a 45 yard punt. With no time outs remaining, Lamarr Jackson moved Baltimore 40 yards in 46 seconds, delivering Baltimore to Pittsburgh’s 23.

Minkah Fitzpatrck and Justin Layne were perfect on the play, as Fitzpatrick pushed the pass from Willie Snead’s hands while Layne drilled him, delivering Pittsburgh’s first 7-0 start since 1978.