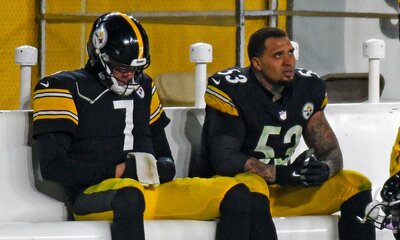 Ben Roethlisberger and Maurkice Pouncey after the wild card loss to the Browns. Photo Credit: Don Wright, AP via USA Today for the win.

Let’s begin with an exercise. Look at the image above. What three words come to mind?

Even if you know nothing about the sport the rest of the world calls “American Football” the power of this image is unmistakable. So too is its poignancy: Something has been lost. The third word is the only one that allows a bit of interpretation: Does this poignant and powerful image punctate something definitive, or does it only capture a moment in time?

Intellectually, it is possible, perhaps even plausible to rationalize scenarios that see the current era of Steelers football continuing. But emotionally, the image Ben Roethlisberger and Maurkice Pouncey together following the playoff loss to the Browns feels like an open and shut case.

These types of images have a way of conveying finality.

And in that, they differ from action shots. Action shots freeze transformational moments forever. Think:

Still shots bear a different breed of power. They communicate something that’s happened in the past that establishes a path for the future. Think of how the shot of Chuck Noll and Terry Bradshaw sneering at each other on the sideline reveals the tempestuous nature that would torture their relationship from the day the Blonde Bomber arrived in Pittsburgh until The Emperor was laid to rest in 2014.

Seeing the image of Ben and Pouncey on the bench at Heinz Field brought to mind another image shot at the same locale. 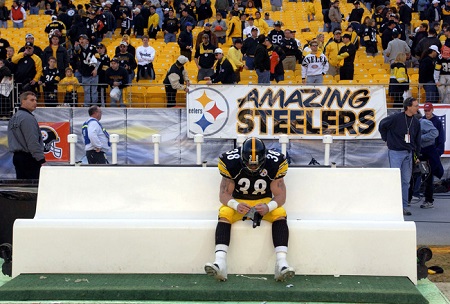 That is of course former Steelers fullback Jon Witman, sitting on the bench following the 2001 AFC Championship loss to the New England Patriots. Take a look at the photo, and consider what followed:

Sure, plenty of players on that ’01 team would bounce back to join Jerome Bettis on the dais at Super Bowl XL, but that AFC Championship loss would be the closest mainstays of the 1990s, guys like Jason Gildon, Lee Flowers and Mark Bruener would ever get to a Super Bowl.

None of that was apparent that day, but glance again at Witman’s drooping head and it all seems so obvious now, acting as a sort of Rosetta Stone for translating Roethlisberger’s and Pouency’s non-verbal language. Let’s look at why.

First Quarter: The Titanic Hits an Iceberg in Just 16 Seconds

As you well know on the very first play Maurkice Pouncey snapped the ball way over Ben Roethlisberger’s head. Some of criticized Ben Roethlisberger for not pouncing on it, but it looked like it was more of an issue of confusion between him James Conner as to who “had it.”

Karl Joseph suffered no such confusion and within 16 seconds the Cleveland Browns had a touchdown.

Teams can effectively respond to debacles like this in two ways:

The Steelers did the opposite. Three plays later Ben Roethlisberger tried to hit Benny Snell. His pass was way too high and went right to M.J. Stewart. Three plays an a 40 yard Jarvis Landry reception later and the Browns were scoring again.

Things got worse.The Steelers got the ball back. They punted after 3 plays. The Browns only need 5 plays, three of which went for double digit yardage, to score again.

Four plays later, on 2nd and 20 Ben Roethlisberger tried to hit Diontae Johnson. The pass was a tad bit high but catchable. It hit both of Johnson’s hands. But instead of pulling it down and in, the ball bounced off and back. Sheldrick Redwine caught it and returned it 30 yards. Three  plays later the Browns were in the end zone again.

That high snap was akin the iceberg that ripped a hole in the hull of the Titanic. Before the Steelers could even slow the flow of water, they were already down four touchdowns.

As the Titanic Sinks, the Hindenburg Responds Distress Signal

As pointed out in our Rapid Reaction, if you only look at the contest’s final 32 minutes, Pittsburgh played pretty well, out scoring the Browns 30-20. Say one thing – Mike Tomlin’s team refused to quit.

Clearly however, Chase Claypool, Diontae Johnson and James Washington made some incredible plays. So did JuJu Smith-Schuster. As did James Conner, practically willing himself into the end zone for the final two point conversion. If this was their last game in Pittsburgh, they both left it all on the field.

Cam Heyward was going up against an offensive lineman who’d met his quarterback hours before the game, yet you’d never know it. T.J. Watt, who has terrorized quarterbacks with relish, never touched Mayfield Baker.  “Minkah Magic” was missing the entire night. 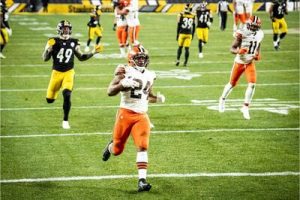 Nick Chubb scores and all Cassius Marsh can do is watch. Photo Credit: Matt Starkey, Browns.com

Not after the turn overs, at the goal line, not in the 4th quarter when the Steelers desperately needed a 3 and out. Instead, the defense allowed the Browns to stitch together a 6 play 80-yard touchdown drive.

A big play or two, a series of sacks, a forced fumble, an interception or a pick six could have made all of the difference.

Instead of acting as the cavalry, the Steelers defense looked more like the Hindenburg responding responding to the Titanic’s distress call. If Steelers Wild Card Loss to the Browns does mark the end of the Roethlisberger era, it is a bitter end indeed.