J.J. Watt, one of the faces of the NFL and the best player in the history of the Houston Texans’ franchise, was released by the team on Friday per Watt’s request.

If you’re a Steelers fan, that likely means you want Pittsburgh to bring Watt to town so he can be reunited with his younger brothers, T.J. Watt and Derek Watt.

He’s a three-time Defensive Player of the Year, and while he’s clearly already played his best football, at 31, Watt is the same age as Cam Heyward and appears to have some good years left. But would it work schematically? I don’t know much, but I do know that any defensive coach worth his salt BETTER make Watt fit into his system. Otherwise, he probably shouldn’t be a defensive coach in the NFL.

For that matter, the eldest Watt brother would be a great fit for Pittsburgh and would arguably be the biggest sports star in town the moment he arrived. 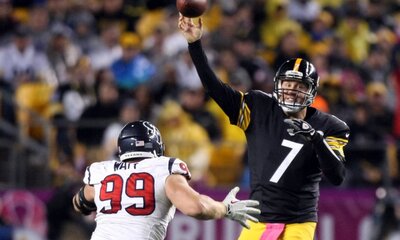 In terms of charisma, T.J., someone who seems to be more James Harrison than he is Joey Porter, pales in comparison to his big brother. No, J.J. would be great for the Steelers and Steeler Nation…in theory.

But there is the matter of finding the creative financing to make such a deal work. As you know, the Steelers find themselves firmly in salary cap hell and are still millions above the projected number for 2021, this despite only having 30-plus players under contract.

Team president Art Rooney II has already stated that the Steelers can’t have quarterback Ben Roethlisberger back for 2021 under his current deal. At first, it appeared that a simple restructuring, something the Steelers’ executives have become experts at, would be the compromise between team and player. Now, it appears that the smart money is on Roethlisberger agreeing to take less money if he wants to come back next year.

If the Steelers figure all that out with their aging franchise quarterback and are able to free up enough cap space to sign J.J. Watt, why not use that money to address more pressing areas of the team?

For example, if the Steelers could get J.J. Watt to sign with them for $10 million a year, couldn’t they convince Tyson Alualu, a pending free agent, to stay in Pittsburgh for much less? The Steelers would still have a more than formidable defensive line and, oh yes, they could perhaps use that extra money to sign slot corner Mike Hilton.

Speaking of retirements, long-time center Maurkice Pouncey finally announced his on Friday after 11 mostly glorious years. Pouncey’s departure weakens an offensive line that was already in decline. Wouldn’t it be smarter to use that J.J. Watt money to shore up the center position?

There could be other factors involved, don’t get me wrong. Maybe Pittsburgh feels the need to lure J.J. to town just so it will be easier to lock T.J. into a lock-term deal when the time finally comes.

The Steelers have more pressing needs than another great defensive lineman. If they’re going to open up a new line of credit in the form of contract restructurings and player releases, perhaps they should use it more responsibly.