….Once upon a time, a once proud Steelers unit fell into deep disrepair.

Someone from outside Pittsburgh caught the Steelers head coach’s eye. Some viewed the outsider of choice as suspect. He had deep ties deep ties to a historic divisional rival after all. But everyone felt it best to embrace a breath of fresh air, to bring in new blood.

And after two seasons of test, the Steelers head coach opted for change again, this time looking no further than the end of his nose. Given his chance, this insider innovated, reanimating a unit that was once again proud….

That little fairy tail intro was prompted by the news that the Steelers officially named Adrian Klemm as offensive line coach, promoting him from his role of Assistant Offensive Line coach. Given that the once dominating Steelers offensive line has slipped from elite status to liability, Mike Tomlin’s decision to promote in house seems like a real head scratcher. 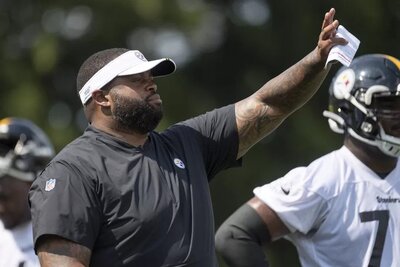 After all, following the Hindenburg Rescuers the Titanic disaster of a playoff loss to the Browns, Tomlin acknowledged the repeating the same thing and expecting a different result is insanity. Yet, after firing Randy Fichtner, he promoted quarterbacks coach Matt Canada to offensive coordinator. Now, after firing Shaun Sarrett, he promotes his assistant Adrian Klemm.

But precedents from Steelers history offers proof that it doesn’t have to be that way. After the 1998 season it became clear that offensive coordinator Ray Sherman was way, way in over his head. Mexican Blogger Carlos Ortega even reports that he once called a play that wasn’t even in the Steelers playbook, but one that came from the Minnesota Vikings playbook.

The Steelers, of course, knew Kevin Gilbride from his days with the Houston Oilers and Jacksonville Jaguars. He was seen as a bright young offensive mind. Or just the guy to bring Kordell Stewart along. Except he wasn’t.

Yes, perhaps he did do a little too much to earn his “Inspector Gadget,” moniker, but with weapons like Jerome Bettis, Antwaan Randle El, Hines Wards, and Plaxico Burress at his disposal, he fielded a good offense and managed the change from Kordell Stewart to Tommy Maddox effectively.

It remains to be seen if Adrian Klemm can follow Mike Mularkey’s example. Kleem does have 3 Super Bowl rings earned as a backup with the New England Patriots, and has extensive experience coaching future NFL offensive lineman while coaching in the collegiate ranks.

That’s a welcome sign, but regardless of his coaching acumen, Kleem has his work cut out for him. The Steelers will likely part ways with Alejandro Villanueva and could see Zach Banner and Matt Feiler while Maurkice Pouncey is contemplating retirement and most certainly will if Ben Roethlisberger does not return.