Pittsburgh Steelers center and perennial Pro Bowler Maurkice Pouncey has announced his retirement, marking the official beginning of the end of an era in Steelers offensive line history.

Fans can be forgiven their frustration over the last two seasons as the Steelers offensive line has slipped for one simple reason:

The Tomlin era certainly didn’t start that way. Mike Tomlin inherited a strong, albeit aging offensive line that promptly fell apart in after the 2007 season and then had to be rebuilt during the 2008 season. What followed was a “Plug and Patch” approach to offensive line building that saw the Steelers sign an entire starting offensive line to 2nd contracts only to cut all of them before they completed their deals.

Indeed, Pouncey arrived at St. Vincents, in Latrobe, with Super Bowl veteran Justin Hartwig as the incumbent and forced him off the team less than a year after he’d signed a 4 year contract with the Steelers. From there Pouncey was a fixture at center, continuing the legacy of excellence at the position that began with Ray Mansfield, continued through Mike Webster, Dermontti Dawson and Jeff Hartings.

But it was anything but easy. 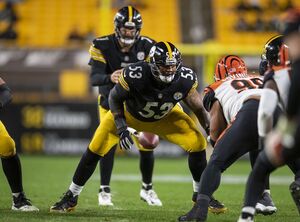 Overcoming Injury a Constant for Pouncey

During the 2010 AFC Championship win over the New York Jets Maurkice Pouncey suffered a dreaded “high ankle” sprain. The team “kept the light on for him” but he was unable to play in what would be his only Super Bowl.

A high ankle sprain would hobble him again against the Browns in 2011 keeping him from the 2011 playoff loss to the Tim Tebow Broncos. In 2013 David DeCastro would fall on Maurkice Pouncey’s leg, breaking it and finishing his season after just 8 snaps. In 2015, Pouncey season end after an injury suffered against the Packers in the preseason.

But Maurkice Pouncey never let it slow him down on the field, and he always remained a presence in the locker room.

Building a dominant offensive line takes time. Maurkice Pouncey gave the Steelers a piece. Ramon Foster, a product of “Plug and Patch” proved himself worthy of being another. In 2011 the Steelers drafted Marcus Gilbert, who remained a force until injuries derailed his career. In 2012, David DeCastro arrived, as did Kelvin Beachum. In 2014, the Steelers took a flyer on Alejandro Villanueva, and by the end of 2015 he was a starter. 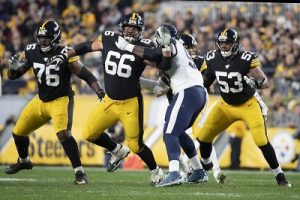 Whether they were protecting Ben Roethlisberger or opening holes for Le’Veon Bell, DeAngelo Williams or James Conner, from 2014 to 2018 the Pittsburgh Steelers had one of the most, if not the most dominate offensive line in the NFL.

Maurkice Pouncey led the line with his superior play. When discipline needed to be enforce, such as when Myles Garrett assaulted Mason Rudolph with a deadly weapon, it was Maurkice Pouncey who retaliated.

That example stands out, but there were numerous smaller ones which either escaped the camera and/or memory. But those plays cemented Pouncey’s role as locker room leader.

Shortly after Ben Roethlisberger declared prior to the playoff loss to the Jaguars that would not retire, Maurkice Pouncey let it be known that he too would return. This was the first indication that Pouency was considering starting his “Life’s Work.”

Indeed, as they sat together following the Hindenburg Rescues the Titanic playoff loss to the Browns, Roethlisberger apologized to Pouncey, “I’m sorry brother, you’re the only reason I wanted to do this.”

Shortly thereafter, word leaked that Pouency was considering retirement. On Friday February 12th, he made it official. By retiring, Maurkice Pouency simplified the Steelers salary cap situation by giving them back over 8 million dollars.

But make no mistake about it, those 8 million dollars will never replace the leadership and character that Maurkice Pouency contributed to the Steelers Way.