Ben Roethlisberger took one for the team. Making good on his pledge to do what was necessary for the Steelers to field a competitive team in 2021, the veteran starting Steelers quarterback agreed to a pay cut to the tune of about 5 million dollars and in doing so he is saving Pittsburgh 15 million dollars in salary cap space due to “voidable years.”

Now, what does it mean and what have we learned? Let’s find out. 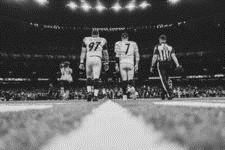 1. Big Ben is a Team Player After All

While this wasn’t the “Ben put his money where his mouth is” and take the veteran minimum salary to return scenario outlined here a few weeks ago, but this is nothing to sneeze at.

Ben Roethlisberger gave back 5 million dollars, 5 million that almost certainly go to resigning other players in the Steelers locker room. Ben does have his faults, he might not be a perfect team player, but he’s a team player.

2. The Steelers Relationship with Roethlisberger is Changing

One of the more interesting and disturbing narratives circulating around Steelers Nation has been that Ben Roethlisberger is somehow hostile to running the ball and insists on running an offense that sees him throw the ball 50 times a game.

Those criticisms were legitimate and by definition debunk the “Ben is anti-run” argument. But that doesn’t change the fact that Ben Roethlisberger has had a lot of say in how the offense has been run. He’s had a lot of autonomy, perhaps too much autonomy. He forced Todd Haley out and Randy Fichtner was hired in part to keep him happy.

Matt Canada’s promotion to offensive coordinator was a sign that this is likely changing. And the fact that the Steelers made no bones about the fact that Ben Roethlisberger would need to bend to meet their needs says a lot.

What says more is that the contract contains voidable years, which in pure business terms means this is a one year deal.

Between the retirements of Maurkice Pouncey and Vance McDonald, Cam Heyward’s restructure and Ben Roethlisberger’s pay cut, the Steelers now are under the projected salary cap of 280 million dollars.
That’s good, but the team only has 33 players under contract for 2021.

More work, in the form of restructures, or perhaps moves to waive veterans such as Vince Williams, remains to be done. Resigning Bud Dupree likely means that other teams will shy away form his torn ACL. JuJu Smith-Schuster won’t be back either.

But the specter of the Steelers fielding an opening day roster that features multiple undrafted rookie free agents starting appears to have been averted.