Serious fans have always known their team’s rosters inside an out. This has always been true, but its truer in the digital age. Still, there are names that appear on a roster that prompt a “WHO?” from even the most fanatical followers.

Rodney Carter exploded out of nowhere to spark the 1988 Steelers upset win over the Denver Broncos with a 100 yard, 2 touchdown game. He even completed a pass. When asked about Carter’s surprise role in the game, Chuck Noll joked that the idea came via a letter from a fan. Carter went on to be an unsung hero of the 1989 Steelers. Bob Labriola once described him in the Steelers Digest as the player who “made a career of ‘Going out and getting open.’”

Two years ago Devlin Hodges fit that bill, and this season that honor feel to Robert Spillane who is now and Exclusive Rights Free Agent. Today we look at his chances of staying in Pittsburgh. 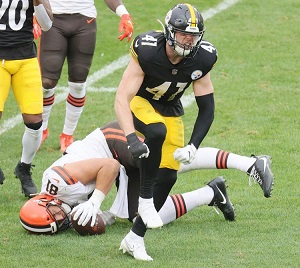 After making the Tennessee Titans as an undrafted rookie free agent, Robert Spalaine joined the Steelers in February of 2019. He got a visit from The Turk on cutdown day but returned to the practice squad a day later. The Steelers cut him in late September, but brought him back in early October and was promoted to the active roster in November, seeing action in 8 games on special teams.

In the Steelers win over the Tennessee Titans, seeming disaster struck as Devin Bush tore his ACL. Spillane  stepped up, delivering a devastating goal line tackle recording 5 on the day.

The following week, Spillane opened the road game against the Ravens with a 33 yard pick six of Lamar Jackson, a pivotal play in a game that went down to the wire.

Spillane registered sacks in the Steelers wins over Cincinnati and in their loss to Washington, before getting injured for the rest of the regular season. He returned for the Hindenburg Rescues the Titanic playoff disaster against the Browns.

The Case for Steelers Resigning Robert Spillane in 2021

Robert Spillane is an Exclusive Rights Free Agent, meaning he’s not going anywhere unless the Steelers decide otherwise. That also means he’s cheap, incredibly cheap and the Steelers need every penny of salary cap space they can scrounge.

Robert Spillane might not quite have proven himself as “Starter Capable” but if he hasn’t, he’s certainly close. Clearly, he’s a competent backup.

The Case Against the Steelers Resigning Robert Spillane in 2021

The aim of this section is to lay out the strongest possible case against bringing a player back. When it comes to Robert Spillane that simply is not possible.

Curtain’s Call on the Steelers and Robert Spillane in 2021

This is a no brainer. Not only will the Steelers bring back Robert Spillane, he played well enough that he could Vince Williams a salary cap casualty. Should Williams stay, Spillane would provide depth at a critical position for the Steelers.

One way or another Robert Spillane will be wearing Black and Gold for the Steelers in 2021.