That didn’t take long. Less than a week after giving his agent permission to seek a trade, the Pittsburgh Steelers cut cornerback Steven Nelson. The move comes less than two years after the Art Rooney II, Kevin Colbert and Mike Tomlin decided that Nelson was worthy of the largest free agent contract in franchise history.

Has the team that decided to delay the a rehash of Mark Malone, David Woodley and the 1980’s by bringing back Ben Roethlisberger for a another year instead embraced a reboot of the Brice McCain, Antwon Blake, Ross Cockrell, Coty Sensabaugh, and Artie Burns?

Maybe. But if we’re honest with ourselves, this shouldn’t be such a shocker. 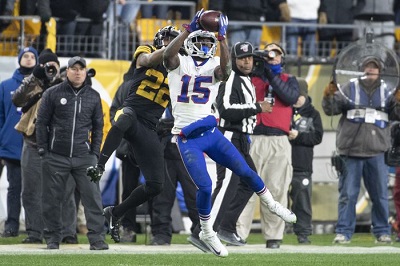 Thus far free agency has evolved for the Steelers much as it was expected to. The Steelers had planned and projected for a 2021 salary cap of about 220 million dollars. Instead, thanks to COVID-19, they got one of about 183.5 million.

Cap gurus like Omar Khan can use creative accounting to get stretch and squeeze contracts into a tight salary cap.

Everyone knew that. So we were told to expect to:

Things are proceeding on schedule. Veterans like Bud Dupree and Mike Hilton are gone. So is Tyson Alualu. That was a bit of a surprise, and in a normal year the Steelers probably would have found the extra money to keep him.

The Steelers haven’t done much in free agency. Sure they’ve resigned Zach Banner and Cameron Sutton. But even those deals required using voidable years, as did JuJu Smith-Schuster. The Steelers made 2 piecemeal signings, in addition to resigning Chris Wormley, but really haven’t done much else

And in the last week, we’ve seen the Steelers cut high-salaried starters. First it was Vince Williams, now it is Steven Nelson. Sure, as Ed Bouchette pointed out in The Athletic, the timing may be a bit off. Normally you’d expect the Steelers to make these moves before free agency to give their guys a chance to make back their money.

They’ve just done that. Certainly, most people expected that cornerback to be Joe Haden. Joe Haden doesn’t make as much as Steven Nelson, but he is several years older. Cornerback is a young man’s game. If you’ve got a corner that’s in his mid 30’s and one in his late 20’s going with the younger one seems like a non-brainer.

But as Bob Labriola pointed out on Asked and Answered, some metrics indicated that Joe Haden had a better year than Steven Nelson. Again, banking too much on those types of metrics is dangerous but it does show that this wasn’t a slam-dunk case. And its also likely that the Steelers didn’t want to cut Nelson, but could come to some other sort of agreement.

As I wrote before, I’m hard pressed to find a way to think of how the Steelers 2021 defense can be better than its 2020 incarnation without Steven Nelson on it. That hasn’t changed.

But this was the reality we expected going into Free Agency. It just took a little longer to set in. Welcome to Steelers Free Agency Reality Therapy.