Look up the word “Guard” in Webster’s on-line dictionary and you’ll see: A person or a body of persons on sentinel duty. Following Webster’s lead, would think that your “Guards” would be more important than any other position on the offensive line.

The conventional wisdom is right in this case. Which isn’t to say that guards are unimportant. The Steeler enjoyed solid play at guard for a long time, yet the quality of play slipped in 2020, and it was noticeable. So, does how does or should that impact the Steelers plans for the 2021 NFL Draft? 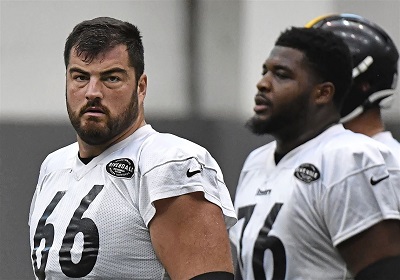 David DeCastro and Chukwuma Okorafo on the South Side. Photo Credit: Pittsburgh Post-Gazette

When he fell to the Steelers during the 2012 NFL Draft, David DeCastro was providing the penultimate piece to an offensive line that would become the NFL’s best for a half decade. Aside from an injury that truncated his rookie season, durability has been one of DeCastro’s calling cards until 2020.

David DeCastro returned to action in week 3 against Houston where James Conner logged his season-best rushing effort clocking in at 109 yards. This folks is not a coincidence. DeCastro played the next week against Philadelphia, was out against Cleveland, and then returned for the next game against Tennessee and started for the rest of the season.

Steel Curtain Rising has no inside information on this front, nor have any sourced reporters confirmed this, but conventional wisdom is that whatever the injury was, it nagged DeCastro all season long. The Steelers other starter at guard, Matt Feilier, departed via free agency, theoretically, leave the left guard slot open.

Gene Collier of the Pittsburgh Post-Gazette once quoted Art Rooney Sr. as saying, “Everyone’s a winner on draft day” (Collier really did. Except Don’t Google it. You won’t find it.) The Chief was right. But sometimes the vibe a player creates is just a little different. Such was the case with Kevin Dotson after the Steelers picked Dotson in the 4th round of the 2020 NFL Draft.

It is hard to pinpoint exactly why it was said or the way that whoever was saying it was different, but word was, from almost the get go, that Dotson was a keeper.

And they were right. Kevin Dotson filled in for DeCastro early in the season and later started the final two games of the season with some commentators suggesting he should replace Matt Feiler. While we’re treating him as a backup for this analysis simply because the Steelers website doesn’t even list him as a guard, barring injury or some other calamity, Kevin Dotson will be the Steelers left guard on opening day 2021, and the team will be stronger for it.

B.J. Finney might be the Steelers starting center, but if he is not expect him to be the “Next man up” at guard. After that, the Steelers have Rashaad Coward, who brings 3 years of NFL experience with the Chicago Bears that includes 30 games and 15 starts. One would suppose that J.C. Hassenauer could play guard in a pinch.

Guard almost perfectly encapsulates the Steelers situation going into the 2021 NFL Draft and the season as a whole. If David DeCastro returns to form and remains healthy, and if Kevin Dotson builds on his rookie year and remains healthy, and if the Steelers get a starter-capable center in the draft, then Pittsburgh can comfortably ignore guard until late in the afternoon on Day 3.

And remember, David DeCastro is both turning 31 and going into the final year of his contract. While he’s certainly a candidate for an extension this summer, he’s also coming off a season in which he struggled.

Given their other needs using a premium pick on a guard is simply a luxury the Steelers don’t have. But the truth is that the Steelers need to boost depth going into 2021 and can’t ignore the need for a potential starter beyond, so their need at guard going into the 2021 NFL Draft must be considered Moderate.