The Steelers boasted one of the best outside-linebacker duos in the NFL over the past two seasons, as both T.J. Watt and Bud Dupree combined for 49 quarterback sacks. With But Dupree departing for the Titans as a much-sought-after free agent, where do the Steelers stand at the position in terms of starters and depth heading into the 2021 NFL Draft? Let’s dive in and find out. 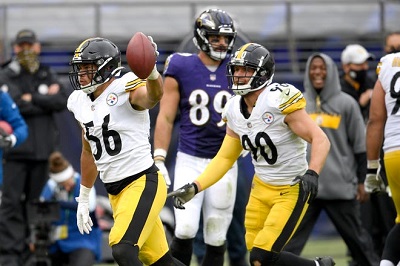 Steelers Depth Chart at Outside Linebacker: The Starters

T.J. Watt, the Steelers’ first-round pick in the 2017 NFL Draft, heads into his fifth season as not only the Steelers best linebacker; he’s their best player and most valuable asset. Furthermore, he’s arguably the most dominant defensive player in the NFL today, despite coming up short in the Defensive Player of the Year voting each of the past two seasons.

With 49.5 career sacks to his name, Watt is on pace to shatter the Steelers’ all-time mark of 84.5 set by the legendary James Harrison. But Watt’s pass-rush prowess can’t just be measured in sacks; the pressure he puts on opposing linemen and quarterbacks is non-stop game-in and game-out. In fact, some credited Watt’s presence with the sudden career uptick experienced by Bud Dupree starting in 2019. Dupree, a first-round pick in the 2015 NFL Draft, struggled with injuries and consistency through four seasons before coming on strong to close out his Steelers’ career.

With that in mind, maybe Alex Highsmith, the Steelers third-round pick out of Charlotte a year ago and the presumed replacement for Dupree as the weak-side starting outside linebacker can also benefit from playing alongside Watt. Alex Highsmith started five games in 2020 and recorded 48 tackles, two sacks and one pass defended. Highsmith also notched a game-changing interception in an important road win vs. the Ravens and M&T Bank Stadium.

Depth Chart at Outside Linebacker: The Backups

To say the Steelers’ depth at outside linebacker is sparse would be an understatement. Olasunkanmi Adeniyi left as a free agent, leaving the newly acquired Cassius Marsh, a 28-year old journeyman originally drafted in the fourth round by the Seahawks back in 2014, as the top backup.

Rounding out the Steelers depth chart is Christian Kuntz, a 2017 undrafted free agent out of nearby Duquesne University.

Steelers 2021 Draft Needs at Outside Linebacker

I believe there is optimism that Highsmith can continue to improve and make a huge enough leap from his first to his second year that Pittsburgh should have itself a fine replacement for Dupree in 2021.

While it didn’t draw much discussion, in a normal year, the Steelers likely would have found a way to keep Ola Adeniyi, who if nothing else would have secured a proven special teams contributor who was familiar with the Steelers defense.

As the Steelers depth chart at outside linebackers stands now, one has to wonder if Kevin Colbert and Mike Tomlin won’t be tempted to hold Invincible like open tryouts just to fill out the roster.

OK, that’s a bit of an exaggeration. But Pittsburgh does need to improve depth and perhaps do it with someone who can develop into a future starter so the priority of outside linebacker for the Steelers heading into the 2021 NFL Draft must be: Moderate