The Pittsburgh Steelers announced they have extended head coach Mike Tomlin’s contract for 3 more years. His new current contract will keep him in Pittsburgh through the 2024 season.

Tomlin’s contract extension might not be a surprise, but it does come a bit off schedule as the Steelers typically have extended their coaches during the summer, either shortly before or during training camp.

Mike is one of the most successful head coaches in the National Football League. We are confident in his leadership to continue to lead our team as we work to win another championship.

If Mr. Rooney were to poll the citizens of Steelers Nation, he’d undoubtedly find disagrees. Indeed, the dissenters would be many, and they would be vocal. They would also be wrong. 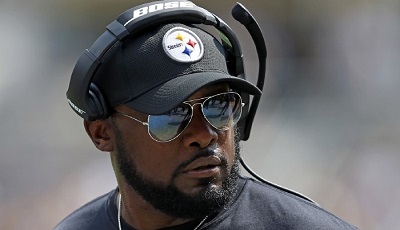 Debunking the Case Against Mike Tomlin

Mike Tomlin has one ring from Super Bowl XLIII, two AFC Championships, 7 AFC North Championships, 9 playoff appearances while compiling a 145-78-1 regular season record while never suffering a losing season. Only once, on Tomlin’s watch have the Steelers been eliminated from the playoffs before the season’s final game.

Yet for all that, based on social media reaction you’d think resume was on par Rod Rust’s 1990 campaign in New England.

Let’s debunk some of the charges leveled against Tomlin:

But if that’s your argument against Mike Tomlin then ask yourself this one question – would you feel different if he’d racked up a bunch of AFC Championship losses? 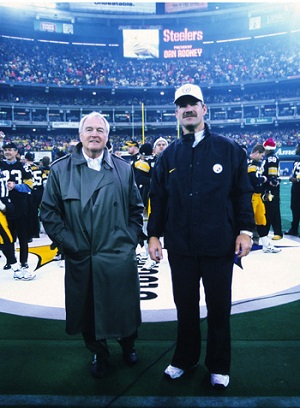 Yet the knock on Cowher was, “He can’t win the big one.” After he suffered his 2nd humiliating Heinz Field AFC Championship defeat to the Patriots in 2004, there was no shortage of fans who felt he should be fired. Fortunately, Dan Rooney ignored them and the Steelers won Super Bowl XL a year later.

“He only won with Bill Cowher’s players.”

Really? Well, by that measure, Bill Cowher started losing in the late 1990’s when Rod Woodson, Greg Lloyd, Dermontti Dawson and Carnell Lake, the Hall of Famers/All Pros he inherited from Chuck Noll, either left or started fading. He only became a champion after a franchise QB (whom he didn’t really want to pick) dropped in his lap.

And if we’re using a predecessor’s success to discredit a successor, then let’s also acknowledge that Kevin Colbert only won with Tom Donahoe’s players.

Yeah, I wouldn’t want to go there either.

“He’s had 10 YEARS to Rebuild Since Super Bowl XLV”

“BUT Tomlin’s had a franchise QB his ENTIRE career. And he’s ONLY won ONE Super Bowl.”

Number don’t lie. This is true. But tell me:

Tom Coughlin did win two Super Bowl rings and he beat the Patriots to get his. Give the man credit. He also closed his chapter in New York with 3 straight losing seasons.

Would Steelers Nation trade 7-9 and twin 6-10 records for another Lombardi? We might. Throw in a playoff win over the Patriots, and I probably take that deal.

But it still shows how hard it is to sustain winning after a championship run. Oh, and how has New York done since kicking Coughlin to the curb?

Give Tomlin the Criticism Deserves and the Credit He’s Earned

Tomlin teams get tripped up by trap games too often. Sure, there are some mitigating circumstances in some cases. But it has happened too often to dismiss as chance.

Has he stubbornly run running backs like Willie Parker, Rashard Mendenhall, and Le’Veon Bell into the ground while failing to staff adequate back up depth? Yes sir! This scuttled two if not 3 playoff runs.

But has wiffing on picks like Jarvis Jones and Artie Burns set the rebuild behind? Absolutely.

Does he let loyalty and personal relationships cloud his decisions on assistants? Yes, at times it seems he does.

These faults are real. But this is also real: No other coach Bill Belichick and arguably Tom Coughlin has been better than Mike Tomlin during the Tom Brady era.