Last year it was Terrapins from the University of Maryland. This year its Aggies from Texas A&M. At least in the 4th round of the 2021 NFL Draft.

12 picks after calling Don Moore Jr.’s name with their own 4th round pick the Steelers went to the Texas A&M well a second time when they picked Aggies inside linebacker Buddy Johnson.

The decision to look to inside linebacker departs from the (definitive) Steelers Draft Needs Matrix which rated cornerback as a higher need, which in no way suggests that this move is a mistake. While a best case scenario for both Buddy Johnson and the team will be for Johnson to shine on special teams this year, the Steelers certainly need depth at inside linebacker.

As the Pittsburgh Tribune-Review’s Chris Adamski pointed out, Buddy Johnson was the leading tackler on the best defense in what is considered to be the NCAA’s toughest conference. But, Adamski reminds us that none of those statistics meant anything to Jerry Olsavsky, the Steelers inside linebackers coach.

Jerry Olsavsky, himself a former Steelers inside linebacker taken as a 10th round pick out of Pitt in the 1989 NFL Draft, explains his attraction to Johnson:

I don’t look at the production numbers, OK” I look at the film and I see production, and I say, ‘Oh, this guy’s a good player.’ I didn’t know (about Johnson’s stat superlatives). … The SEC is great football. But if you watch one game, you would be like, ‘Wow, this guy is active.’ And that’s what I’m looking for.

One would expect no less from Jerry Olsvasky. While Olsvasky has worked with superior athletes such as Lawrence Timmons, Ryan Shazier and Devin Bush, he was once described by the Monday Night Football broadcast team as “One of those players who isn’t big enough, isn’t fast enough, but just simply good enough.” 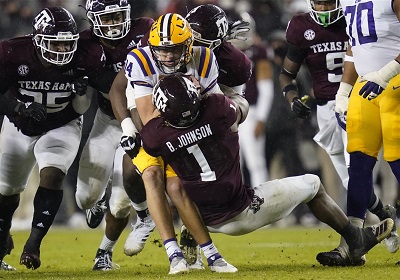 So just what is that that Jerry Olsvasky sees when he looks at the tape of this 6’, 229 pound, 23 game starter for the Aggies who led Texas A&M in tackles for the last two years? Well, let’s take a look:

That’s a nice tape. What is particularly encouraging is that Buddy Johnson appears to have sound tackling technique. While the Steelers tackling has been better of late, failure on this fundamental skill has been at issue in the not too distant past.

How Buddy Johnson Fits In

The Steelers obviously have a lot invested in Devin Bush’s development, but with Vince Williams and Robert Spillane playing on one year deals, Pittsburgh clearly needs to think of the future. While Johnson will get a fair shake and a reasonable shot at earning a helmet on game day, he doesn’t need to come in and made an immediate impact.

That can change in a hurry, as Vince Williams learned during his rookie year, but for now Buddy Johnson adds depth in the present, offers potential for the future and hopefully can begin contributing on special teams immediately.