The Steelers remained true to their needs late into the 2021 NFL Draft when they chose Miami outside linebacker Quincy Roche with their 6th round pick.

Draft analyst John Ledyard, who has never pulled a punch when he’s disagree with one of Kevin Colbert’s draft decision, said this:

Love the Steelers taking Quincy Roche there. Thought he was overrated when people were talking about him as a top 50 guy, but being on the board at 216? 4th rd grade from me, limited but savvy rusher with good physicality and competitive edge.

This opinion is shared on the South Side. Steelers defensive coordinator and outside linebackers coach Keith Butler confessed, “It was a little bit of a surprise, him being there. We rated him around the late third, early fourth, or all the way into the fifth.” 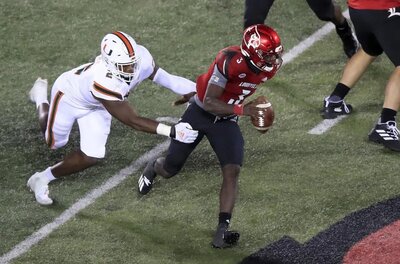 A Baltimore native who grew up as a Ravens fan, Quincy Roche started 10 games for Miami in 2020 and registered 14 1/2 tackles for loss. Roche made 4 1/2 sacks and totaled 45 tackles. When he was a sophomore, Roche had six sacks while starting five of 13 games. He also had seven sacks in his redshirt freshman season.

Here’s a look at his highlight reel:

Looking at that, it is a bit surprising that Roche lasted to the sixth round, but we also said that about Isaiah Buggs a few years back…

How does Quincy Roche Fit In? He Provides Depth

At outside linebacker the Steelers have T.J. Watt and Alex Highsmith. Behind him they have Cassius Marsh, whom the Steelers added in December after Bud Dupree went down, off season undrafted futures contract free agent addition Jamir Jones.

Put in simple English, Quincy Roche will have to make more effort NOT to land a spot on the 53 man roster than he will to secure one.

Keith Butler seemed unfazed, remarking, “I think we’ll be OK at that position. A lot of stuff can happen, and we’ll wait to see before we get to training camp and how we develop in those situations.”