In the “Watch what we do, not what we say” department, the Steelers made their first personnel addition following the 2021 NFL Draft when they signed former New York Jets safety Arthur Maulet to a one year contract.

Sean Davis, who was the number one back up at both positions last season, signed with the Colts. The team has Antoine Brooks, who was their 6th round pick in the 2020 NFL Draft, but Brooks only appeared in four games during 2020. He began the season on the practice squad and was activated in November and saw his first action in the win over the Bengals.

The move suggests that the Steelers were looking to address safety earlier in the draft than they did, when they picked Tre Norwood with their first 7th round pick.

The move also suggests, against logic, that the Steelers are comfortable with the depth they have behind Alex Highsmith and T.J. Watt. 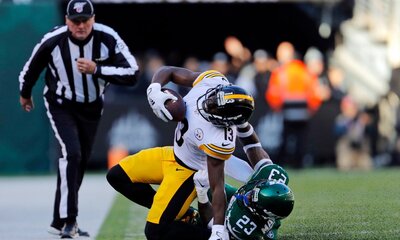 From Foe to Friend Arthur Maulet

Arthur Maulet broke into the NFL in 2017 as an undrafted rookie free agent with the New Orleans Saints. He appeared in six games for the Saints in 2017. In 2018 he made the active roster for New Orleans, but was cut, was signed by the Colts where he saw action in 5 games. The Colts cut him, and he was resigned by the Saints and he played one game for them.

During 2019 and 2020, Maulet appeared in 23 games for the Jets, making 11 starts, and participating in about 1/3 of the defensive snaps, while also being active on special teams. During his NFL career, he has made 2 interceptions and one sack.

During the Steelers 2019 loss to the Jets, Maulet made 4 tackles, and his illegal contact penalty against James Washington set up a Mason Rudolph to Diontae Johnson touchdown one play later, with 9 seconds remaining in the first half. (He was also fined for a horse collar tackle, picture above.)

From Friend to Foe Villanueva Signs with Ravens

In the from friend to foe department, former Steelers left tackle Alejandro Villanueva signed with the Baltimore Ravens for two years. The move was widely reported prior to the draft and was expected.

Steel Curtain Rising will have more on this move later.