It appears we’ve reached the point of the Steelers offseason that I like to refer to as “Putting in the Work.”

The reason I say that is because of the endless amount of videos that pop up on social media in May, June and July of Steelers players hard at work at the gym and/or at some high school field. They’re squatting, lifting, sprinting, doing those cone drills, etc., etc. 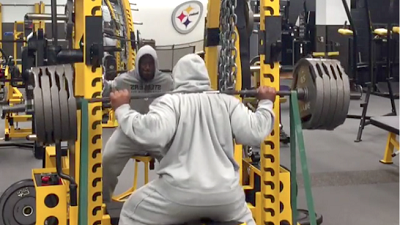 Just in the past few weeks or so, we’ve learned that second-year player, Alex Highsmith, has added a few pounds of muscle during the offseason in an effort to, among other things, rise to the occasion and capitalize on his great opportunity to win the starting job at outside linebacker, opposite T.J. Watt. Also, Marcus Allen, the former Penn State safety, has been hard at work at the gym, bulking up for his now seemingly permanent role as an inside linebacker.

I can go on and on with these examples; they’re endless and everywhere. Just about every player has some version of “Putting in the work” posted on some social media platform.

I could be wrong, but I believe Antonio Brown was one of the first well-known professional athletes to promote his workouts on social media.

Nobody seemed to be more dedicated to his craft than Brown, but maybe that was just the perception that we got thanks to him being such a tireless self-promoter. I obviously can’t speak on the dedication of all Steelers players, but I think it’s safe to assume that most have always been serious about “putting in the work.” Much like a lot of things in life, these days–including what your friends just had for dinner — we are more aware of the dedication of professional athletes thanks to the advent of social media.

Speaking of social media, the non-football activities of Steelers players often come under great scrutiny the moment they either screw up in a game or their team simply loses one. JuJu Smith-Schuster, a social media self-promoter if there ever was one, has come under fire in recent years for his “lack of focus and/or discipline” due to supposedly worrying more about furthering his brand and TikTok dancing than being dedicated to his craft. However, this was the same man who hired a trainer last offseason and put himself through hell, training twice a day for six days a week in preparation for the 2020 regular season.

Yet, by the end of the year, the only thing people wanted to focus on was his logo dancing and TikTok videos, as if they were totally sapping his ability to concentrate on the football field.

Do you think anyone who can add about 10 pounds of muscle is going to let his off-the-field “playtime” distract him during a game? Furthermore, do you think his teammates, players who, like Smith-Schuster, dedicate hours to conditioning their bodies for the rigors of professional football, are going to allow themselves to be distracted by some tweet or a reporter’s question about said tweet?

The NFL is a serious business (often too serious, in my opinion), and if a player isn’t “putting in the work” at the gym, the high school field or even the meeting room, it’s going to show up during a game. These are the elite of the elite. Even the guy sitting at the end of the bench must totally dedicate himself to his craft if he wants to keep earning a paycheck every week.

I don’t know when it became a thing that a player must focus on football 24/7/365 in order to succeed (certainly the days of Ray Mansfield taking a job as a substitute teacher to make ends meet in the off season are long gone), but that’s apparently what many fans and even a lot of media members think. It’s obviously impossible to commit yourself to your profession every second of every day, but you better believe the vast majority of athletes devote more than enough time to theirs.

Do a lot of them play video games and have fun on social media? Of course. Does it mean they’re not committed to what they do for a living? Of course not.

If you truly think that you can step on an NFL field without the proper amount of dedication and preparation, perhaps you should be committed…to an institution.