“I want to retire here, Coach.” “I want you to retire here because this is your bleepin’ city, and you’re my bleepin’ guy!” – Jerome Bettis and Bill Cowher on the sidelines of Three Rivers Stadium, fall 1996

Rebounding from a Super Bowl loss is never easy, but the 1996 Steelers had some unusual challenges to master. 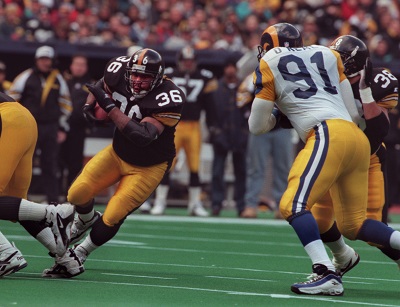 Free Agent Exodus from Pittsburgh Continues – With a Twist

As is often the case in the salary cap era, the Steelers would see significant roster turnover during the ’96 offseason. Some notable departures included starting quarterback Neil O’Donnell, who left for the Jets as a free agent; outside linebacker Kevin Greene, who inked a deal with the expansion Carolina Panthers; and right tackle Leon Searcy who signed with the rival Jacksonville Jaguars.

Greene’s shoes would be filled by Jason Gildon, a third-round pick in the 1994 NFL Draft. Jim Miller, a sixth-round pick out of Michigan State in ’94, would ultimately beat out veteran Mike Tomczak and youngster Kordell Stewart in training camp and be named the starting quarterback for the start of the ’96 season.

Another departure was unexpected; I’m talking about promising young running back, Bam Morris, who was cut after pleading guilty to a felony charge for marijuana possession.

While the Steelers still had Erric Pegram, they would need to find a replacement and that’s where history was made.

The Bus Arrives in Pittsburgh

You might remember the 1996 NFL Draft as the one where the Steelers selected offensive tackle Jamain Stephens in the first round… if you immediately went into a coma the moment Stephens’ name was called.

However, if you’re like most Steelers fans, you probably recall the ’96 draft as the one in which Pittsburgh sent a second-round pick to the Rams in exchange for some guy nicknamed The Battering Ram. That was Jerome Bettis‘ moniker when he was a rookie phenom in Los Angeles. However, Bettis had already fallen out of favor with his Rich Brooks by the time the Rams moved to St. Louis for the 1995 season, which was basically a lost one for the third-year back from Notre Dame.

There were questions about Bettis’s dedication, attitude and work ethic. Fortunately for the Steelers, the Rams were intent on drafting Nebraska running back, Lawrence Phillips, a young man who had already been in trouble for far worse things than a lack of dedication — including physically assaulting his ex-girlfriend while at Nebraska.

So how would the Steelers follow up their 1995 AFC Championship season?

If you simply went by the first game of the season, a 24-9 road loss to an expansion Jaguars team that had already proven to be a thorn in the Steelers’ side a year earlier, you may have thought the ’96 season would be a long one.

Not only was Jim Miller bad in his starting debut; he was so bad, Bill Cowher replaced him at halftime with Mike Tomczak — a move that would prove to be permanent. Things got worse for the Steelers. Their most fierce pass-rusher and the soul of their defense — legendary outside linebacker Greg Lloyd — was lost for the year with a torn patella tendon.

Uncertainty at quarterback. Both Quiver and Quake, the two main cogs in the Steelers Blitzburgh defenses of 1994 and 1995, were now absent. Jerome Bettis’ debut amounted to 57 yards on 14 carries. The Steelers suffered so many injuries at linebacker that coaches talked about moving to a 4-3.

The last three opening day games had been total disasters, with thing getting progressively worse for Pittsburgh. Yet, the Steelers bounced back each time. Could they do it again?

The Bus Roars and the Steelers Rumble 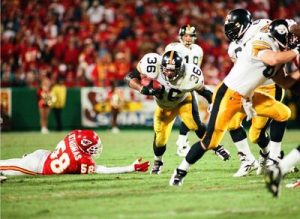 Jerome Bettis rushes in the Steelers 17-7 win over the Chiefs. Photo Credit: Steelers.com

Fortunately the Steelers were ready to do it again. They righted the ship and won nine of their next 11 games.

Jerome Bettis quickly proved to be the ideal running back for Bill Cowher, the Steelers and the city of Pittsburgh. His size, running style and body type was the perfect formula for Cowher’s Smashmouth philosophy. Bettis himself recognized this, proclaiming that running behind the Steelers offensive line was “like running down hill.”

Bettis was such a sensation, Myron Cope, the late, great former radio analyst, aptly named him “The Bus,” a nickname that would stick with him forever. If there were questions about Bettis’s character, they were erased well before the ’96 season was over. Perhaps the most notable victory during Pittsburgh’s 9-3 start was a 42-6 thrashing of the Rams, Bettis’s former team, on November 3 at Three Rivers Stadium. The Steelers jumped out to a 14-0 lead on two touchdowns by Bettis — including a tough three-yard score and a 50-yard touchdown where the big guy outran the entire Rams’ defense.

Rod Woodson, who was lost in Week 1 of the ’95 campaign with a torn ACL, returned to his Pro Bowl and All-Pro form in ’96. But perhaps the biggest surprise was the contributions of Chad Brown, an inside linebacker by trade, who was forced to slide over to outside linebacker to replace the injured Greg Lloyd. Not only did Chad Brown, a second-round pick in 1993, fill Lloyd’s shoes, he sprinted in them to the tune of 13 sacks. Those numbers coupled with Jason Gildon’s seven sacks made the absences of both Lloyd and Greene much more palatable.

He wasn’t great by any stretch, but he was just the kind of veteran presence a conservative young coach like Cowher could heavily lean on. Stewart, the young quarterback who was lovingly dubbed “Slash” for his ability to fill many different roles — including passer, receiver, runner and even occasional punter — returned to serve as same all-around weapon that he was during his 1995 rookie campaign.

They did win the old AFC Central again — by one game over the upstart and playoff-bound Jaguars — but were denied a bye thanks to a 1-3 slump to close out the regular season.

The 10-6 Steelers entered the postseason as the number three seed, and who would their opponents be on Wild Card Weekend? The same Cinderella Colts team that narrowly lost a thriller in the AFC title game at Three Rivers the season before. After falling behind 14-13 at the half, thanks in part to a pick-six thrown by Tomczak, the Steelers dominated the final two periods, scoring 29 unanswered points in a 42-14 victory that allowed the home folks to breathe much easier this time around.

The Steelers would miss Jerome Bettis a week later in the AFC Divisional Playoff game at New England. This was one of those games when something just wasn’t right. Fog engulfed old Foxboro Stadium leading to the name Fog Bowl II.

Mike Tomczak had started and won Fog Bowl I while at Chicago, but both Tomczak and the entire team played the entire game as if they were in some sort of a fog. Tom Donahoe would describe the performance as “flat” providing the first public glimpse a rift between Cowher and Donahoe.

The Steelers fell behind 21-0 in the first half. In the second half, Bill Cowher inserted Kordell Stewart, as he’d done in the season finale against Carolina and then again against the Colts in the playoffs. 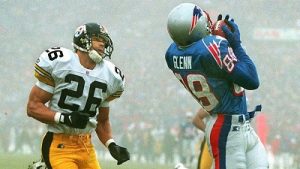 In both cases Kordell had sparked the Steelers offense, alas he could not summon the magic a third time, as the Steelers only managed a field goal in the third quarter.

The Steelers defense was little better, while it held the Patriots offense in check for much of the 2nd half, it failed to make any game-changing plays.

While the Steelers 1996 campaign never quite carried the mystique as the previous two seasons that ultimately ended in the AFC Championship Game and Super Bowl, Bill Cowher deserves credit for managing the loss of his starting quarterback, losing his best defensive player on opening day, seeing his starting running back get arrested, and dealing with additional unrest at the quarterback position all the while keeping his team on track as a Super Bowl contender.

Impressive as those accomplishments are, they over overshadowed by something far more important: