In case you tuned out and are only now starting to tune back in now that Steelers training camp is nearing, the big news out Pittsburgh following OTAs is that Steelers insider Dejan Kovacevic, the founder and editor of DK Pittsburgh Sports, came under fire recently for writing about and then podcasting about the possibility that someone within the Steelers organization was upset with second-year guard Kevin Dotson for a supposed lack of conditioning this offseason. 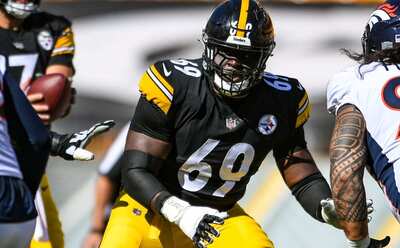 With the Steelers offensive line in total rebuild mode thanks to the release of guard David DeCastro last week, this has the potential to be a big story, especially when you consider the fact that Kevin Dotson, who had a tremendous rookie season in spot duty in 2020, was penciled in as the new starting left guard the very second Matt Feiler left via free agency in March.

In fact, according to DK’s source, when Trai Turner was brought in for a visit during the week of mandatory minicamp, it wasn’t in an attempt to find DeCastro’s replacement at right guard; it was to possibly find someone who could play left guard in place of the seemingly undisciplined Dotson. (Turner was ultimately signed to replace DeCastro as the starting right guard for 2021.)

The funny part was how quickly Steelers fans rallied around Kevin Dotson and took to social media to post pictures and videos of the guard hard at work during the offseason. Not only did the fans take up for Dotson, but his trainer —Duke Mayweather –did as well. Even other local reporters scoffed at Kovacevic’s story and said things simply did not add up.

Just because things don’t add up on the surface, that doesn’t mean there aren’t people within the Steelers’ organization who are upset with Dotson. Dotson could be taking his opportunity to be the next starting left guard very seriously — hitting the gym, hitting the film room, etc.–and yet there still could be at least one person within the Steelers’ organization — a coach, a front-office executive, freaking Art Rooney II–who is unhappy with his desire and dedication.

Think about it, why would Kovacevic, a longtime local sports reporter, want to make his job harder by fabricating a story that’s going to anger the Steelers and possibly cause him to lose access to players and coaches? Heck, Ramon Foster works for DK Pittsburgh Sports. It would be foolish for Kovacevic to make this public if it wasn’t said to him. Mark Madden, the popular and controversial Pittsburgh sports talk radio personality, has had sources within the Steelers’ organization for years. Who were/are they? A good journalist would never reveal such a thing.

Anyway, more often than not, when Madden reports something from his anonymous sources(s), it turns out to be true.

Case in point, Madden was the first person to report that running back Le’Veon Bell would be suspended at the start of the 2016 season for missing several mandatory drug tests. Nobody wanted to buy it at the time. Bell, who was suspended for the first two games of the 2015 campaign, vehemently denied this rumor.

It turned out to be true.

Again, though, I’m not saying that Dotson is out of shape and/or not taking his job as a professional football player seriously. What I am saying is that at least one person within the Steelers’ organization is probably unhappy with him for one reason or another.

Football people are weird. Coaches can be unusual birds and are often hard to please. General managers can have strange opinions on players. Even owners are susceptible to placing one of their charges in the dog house and never letting him out.

There could be any number of reasons why someone is unhappy with Dotson. Maybe it’s his draft pedigree. After all, he was a fourth-round pick from Louisiana who wasn’t even invited to the 2020 NFL Combine. Perhaps someone feels Pittsburgh could do better at left guard in terms of talent and ability.

It’s like what Keith Willis once said about making a name for himself as a defensive end in the NFL despite being an undrafted free agent from Northeastern in 1982: “For certain people, you weren’t anything but a free agent but I never fell prey to that.”

They say all it takes is one person to be your champion in order to succeed at something. The opposite can be true, as well. I think the most famous example may be the disdain former Raiders owner Al Davis continuously had for Marcus Allen, a Hall of Fame running back and one of the greatest players to ever don the silver and black. There’s never been any specific reason given as to why the late Davis had it out for his star running back –everything from Allen’s training camp holdouts to his lack of breakaway speed has been mentioned as possibilities –but there’s no question the feud was very real.

If you’re going to have someone within your organization not believe in you, the last person you’d want it to be is the one who signs your checks.

In conclusion, all the workout pictures and videos in the world aren’t going to change the fact that at least one person within the Steelers’ organization is likely upset with Kevin Dotson. Is it justified? I can’t answer that. I do know that when it comes to Dejan Kovacevic, instead of killing the messenger, you should probably be asking why a promising young guard is seemingly in the doghouse of a prominent member within the Steelers’ organization.