Coming off back-to-back playoff runs that ended short of the crown, both Steelers Nation and the Steelers organization entered 2003 re-energized. Bill Cowher had weathered a turbulent three-year period from 1998-2000 and rebuilt his team into the same bona fide contender it had been in the early-to-late-’90s.

Hope that the Steelers could finally do that in 2003 had been given new life thanks to Tommy Maddox. Maddox had come out out of nowhere to help rescue a 2002 Steelers season that was quickly imploding. “Tommy Gun” was the toast of the town for his guts, his bravado and his ability to lead a passing attack the likes of which hadn’t really been seen in Pittsburgh since Terry Bradshaw’s time.

With Kordell Stewart‘s departure in the offseason, there was no doubt who the Steelers starting signal-caller would be in 2003.

The Steelers had thrown that lot in with Maddox, and the season would rise and fall with his success. 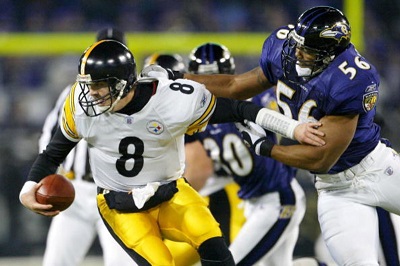 Critical Seeds Planted During the 2003 Off Season

Other than Stewart, there weren’t any notable departures. Outside of adding tight end Jay Riemersma, you could say the same for free-agent acquisitions, as Pittsburgh would be entering the ’03 campaign with the roster that won back-to-back division titles mostly intact. 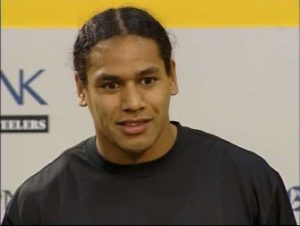 The 2003 NFL Draft was noteworthy for the fact that the Steelers, in a rare move for the organization, took a huge gamble and traded up 11 spots from 27 in order to select USC safety Troy Polamalu with the 16th pick. Polamalu appeared to be the prototypical strong safety for the Steelers 3/4 zone-blitz defense, so trading up seemed like a calculated risk worth taking.

Because Pittsburgh had to give up a few picks in the trade with the Chiefs–in addition to the Steelers’ first-round pick, Kansas City also received a 2003 third and sixth-round pick–the 2003 draft class consisted of just five players, with other notable members being outside linebacker Alonzo Jackson (second round, Florida State) and cornerback Ike Taylor (fourth round, Louisiana-Lafayette).

In training camp news, Amos Zereoue, in a development that seemed to be inevitable based on the previous season, beat out the very popular Jerome Bettis in a battle for the starting running back spot. It was certainly a great opportunity for Zereoue, a third-round pick out of West Virginia in 1999, and perhaps signified the beginning of the end for the 31-year old Bettis, who had been battling injuries the previous few seasons.

Tragedy nearly struck the organization at the tail-end of training camp, when outside linebacker Joey Porter was shot outside a Denver nightclub while in town to watch his alma mater, Colorado State, take on rival Colorado in an early-season college matchup. Fortunately, Porter wasn’t critically wounded, as the bullet entered his buttock and lodged in his thigh. Porter’s recovery time was brief, and he actually appeared in 14 games in ’03.

With the Porter incident behind them, the Steelers opened up the season with an impressive 34-15 victory over the division-rival Ravens at Heinz Field. Tommy Maddox passed for 260 yards and three touchdowns on the day –including two to receiver Hines Ward — as the offense, specifically the passing attack, appeared to pick right up where it left off the previous season.

Both the 1999 and 1998 seasons had opened with wins but ended with ugly implosions. Could and opening day win be an ominous sign?

After splitting their next two games on the road — including a 41-20 loss to the Chiefs at Arrowhead Stadium that was a little closer than the final score indicated and a win over the Cincinnati Bengals — the Steelers were sitting at 2-1.

Then the wheels fell off.

The Steelers lost their next five games to fall to 2-6 at the halfway mark of the season. Perhaps the most noteworthy losses during this streak were the two that started it — back-to-back blowout home defeats at the hands of the Titans and Browns, respectively. 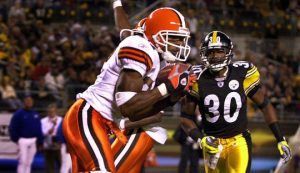 The offense wasn’t clicking. The defense was failing. This included the rookie Troy Polamalu, who certainly wasn’t the phenom he would one day become, as he struggled to grasp the Steelers’ very complicated zone-blitz scheme.

As for Amos Zereoue and his starting opportunity, it was an epic fail; he started just six games and rushed for a total of 433 yards. Bettis won back his starting job by season’s end and tallied 811 yards, while also eclipsing the 12,000-yard mark for his legendary career.

Perhaps the biggest reason for the Steelers’ failures in ’03 had to do with a sudden love affair with the passing game.

While Tommy Maddox wasn’t necessarily horrible in his first full year as a starter–he passed for 3,414 yards while throwing 18 touchdowns and 17 interceptions — he clearly wasn’t capable of carrying an offense, especially one that would go on to finish 31st in rushing — a result that seemed inexplicable for a Cowher coached team. 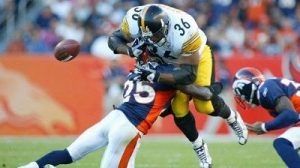 A neck injury cost left tackle Marvel Smith most of the season. During training camp Kendall Simmons experienced a sudden weight loss and was diagnosed with diabetes which disrupted his ability to play. Things got so bad that by mid season, Bill Cowher had to move Alan Faneca from guard to tackle for a few games, and in a few other contests Faneca was rotating between the two positions depending on which down it was.

But even if injuries made the Steelers offensive line into a liability, the team simply lacked a commitment to the run, as evidenced by Mike Mularkey’s decision to call 38 pass plays on the in near blizzard like conditions in a road game against the New York Jets — which the Steelers lost 6 to 0.

A False Shot at the Playoffs and a False Prophecy

Even as the Steelers languished near the bottom of the AFC North, there was hope. Hope because the AFC North was one of the NFL’s worst divisions that year. After a thrilling 13-6 road victory over the Browns on November 23,  The Steelers sat at 4-7 and were just two games behind the Ravens, with a Week 17 matchup between the two rivals still on the horizon. 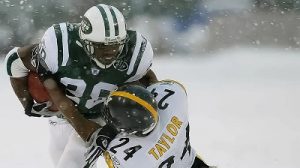 Unfortunately, those hopes were quickly dashed thanks to losses in two of the next three games — including a last-second defeat against the Bengals at Heinz Field the following week and the fore-mentioned infamous 6-0 loss to the Jets at Giants Stadium on December 14.

The Steelers and Ravens still met on Sunday Night Football to close the season. And although neither team had anything to play for, both teams fought as if a playoff berth were on the line. In fact, Bill Cowher opened the 2nd half by calling a fake punt, which tied the score, and then the Steelers went ahead late in the fourth.

The Steelers would ultimately finish third in the division with a 6-10 record, as Baltimore captured the North with a 10-6 mark.

For Bill Cowher, it was his fourth playoff-less season in six years and the second time his teams finished 6-10 since 1999. In many ways, the 2003 campaign felt like the final chapter of a wacky, unstable and topsy turvy era that began with the five-game losing streak that closed out the 1998 season.

Indeed, in the pages of the Steelers Digest Bob Labriola cautioned fans to look at 2003’s disappointments the way one would view someone with a weight problem — who didn’t gain that weight over night, nor would they lose it overnight.

Sure, the 6-10 finish earned Pittsburgh the 11th overall pick in the 2004 NFL Draft, but its not the Steelers were only one player away from re-opening their Super Bowl window, were they?

Yes, the Steelers 2003 season felt like an end to an era. That feeling turned out to be true.