t was a magical weekend in Steeler Nation, as five former members of the Steelers organization–including players Donnie Shell, Alan Faneca and Troy Polamalu, as well as head coach Bill Cowher and legendary scout, the late, great Bill Nunn–were inducted into the Pro Football Hall of Fame in Canton, Ohio. 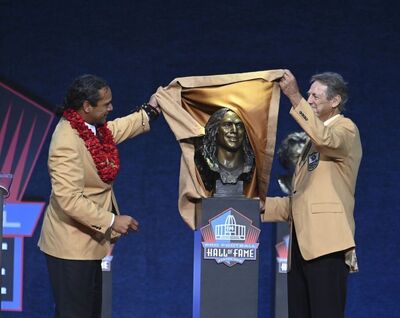 That’s right, in a rare instance of the COVID-19 virus bringing about something cool, Shell, Polamalu and Cowher–members of the 2020 class who had to wait a year because of the worldwide pandemic–joined Faneca–who, along with the deceased Nunn, was inducted in 2021–for a tremendous weekend of fun and celebration.

Memories were shared. Speeches were given. Tears were shed. Lots of tears were shed by Steelers fans, in fact, as they honored their heroes from the past and endlessly thanked them for serving their favorite football team well.

It was nice to see Steelers fans honor the past. It was cool to see them pay homage to people who created so many awesome moments in their lives.

I’m not sure if they ever did, but they certainly don’t seem to appreciate the history of the NFL in 2021, not when the acquisition of a fourth-string tight end garners way more “clicks” and discussion than the passing of a legendary head coach, such as Don Shula, who died in 2020 at the age of 90. Few seemed to notice or take the time to honor a career that included two Super Bowls, an undefeated season and the most wins by a head coach in NFL history (347.)

Truthfully, it may be unfair to expect Steelers fans, especially those under the age of 40, to even know who Shula is, let alone honor his passing. Also, Shula coached the Colts and Dolphins, not the Steelers. Duh! I get that, but I have always had great respect for the history of the NFL, a history that includes more than just the black and gold, btw.

I grew up on NFL Films. I gained so much knowledge about the players, the rules, the history of the game, etc. Heck, just hearing John Facenda, the voice of so many NFL Films features before his sudden passing in 1984, still gives me chills. Same for the awesome NFL Films scores, such as The Autumn Wind. That score and accompanying Facenda narration honors the Raiders, an old rival of the Steelers. So, again, why should I expect the black-and-gold faithful to care about that? Fine, I’ll give you that.

However, fans should appreciate the past just a little more. And if they don’t want to appreciate and honor it, they should at least know it. I’ve often joked that newer Steelers fans sometimes refer to Chuck Noll, the team’s legendary former head coach who helped to transform the franchise into the NFL juggernaut it is today, as “Knoll” or even “Knox.”

I think it’s important to know the NFL’s/Steelers’ past. No, you don’t have to appreciate, respect or honor it — as an 11-year old, I certainly didn’t shed a tear when George Halas passed away in 1983.

But knowing the Steelers’ past allows you to gain a better perspective on things that are happening today. The world, the NFL and the Steelers existed before “now,” before social media. For example, did you know that Jack Lambert was the first training camp holdout in franchise history? That happened in 1977, the same year that Mel Blount also held out of camp and even threatened to sue Noll over Noll’s testimony in the “criminal element” lawsuit filed by Raiders’ defensive back, George Atkinson.

Steelers players got arrested in the past. They had pastimes outside of football. Terry Bradshaw recorded country albums and starred in movies. He even flirted with leaving football full time to focus on music (can you imagine a story like that in the age of social media?) Frenchy Fuqua used to show up to the stadium wearing funky and fly outfits, complete with shoes that had goldfish floating in the heels.

Mean Joe Greene once threatened to quit the Steelers over a perceived lack of commitment by the organization to win a championship.

Fans spent the vast majority of Bill Cowher’s career thinking he was merely an okay head coach that didn’t have what it took to win a title. The Chin would never “Win the Big One” fans insisted.

Chuck Noll once walked out of a press conference when reporters asked him if he would ever consider stepping down as head coach of the Steelers.

Dan Rooney, the transformative team president, had to fire his brother, Art Jr., the chief scout and one of the architects of those legendary 1970s Super Bowl teams.

Oh well, that’s my lecture for the day. As the Steelers continue to prepare for their 2021 campaign, remember that they will face challenges during the season, but these challenges likely won’t be unique or original.

It does however make you a fan who’s perhaps capable of taking more things in stride.