The Pittsburgh Steelers prevailed in their third preseason outing of the summer at Heinz Field where they triumphed over the Detroit Lions 26-20. Although “its only preseason” the contest was not nearly as close as the final score suggests.

Here are 6 quick, “Its Only Preseason But” observations. 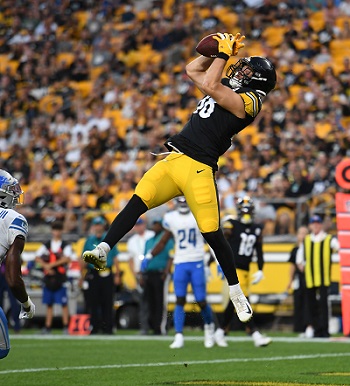 All eyes were on Ben Roethlisberger as he took the field for the first time following the Hindenburg Rescues the Titanic disaster in the playoffs against Cleveland. Since then Ben Roethlisberger agreed to take a 5 million dollar pay cut to return while admitting that his arm did not hold up well during the course of 2020.

Pretty well. On the plus side Ben showed his old mobility in the pocket, dodging around to buy time and hitting receivers down the field. Likewise, his arm strength looks just fine, as he rifled off two touchdown passes in the Red Zone.

He was right on the money in trying to hook up with Eric Ebron, but Ebron couldn’t hold on.

However, his pass to Diontae Johnson looked to be a little underthrown. Johnson noted, and slowed to adjust his route. Roethlisberger himself admitted that he put too much air into that ball. That’s good, but make no mistake, the Buffalo Bills will destroy the Steelers on that type of play when the regular season starts.

2. Too Early to Worry about the Run Defense?

The Lions top four rushers had long runs of 12, 13, 10 and 9 yards. OK, one of those was a scramble by David Blough and we are talking about an offense that didn’t get on the board until the first minute of the fourth quarter.

Sometimes preseason stars are just that – preseason stars. Anyone even remember Matthew Thomas? Neither did I. Had to look up his name. This might jog your memory:

And here we introduce Pat Freiermuth. A lot of people questioned the Steelers decision to draft Pat Freiermuth, a tight end out of Penn State, in the 2nd round of the 2021 NFL Draft.

No one’s asking that question this morning, when Freiermuth caught not one, but two touchdown in the end zone. Both times he had double coverage, both times Ben Roethlisberger found Freiermuth. Both times he made it look easy.

Najee Harris and Anthony McFarland both put in strong nights. But if the Mike Tomlin era has taught us ANYTHING its that the Steelers need a running back depth chart that’s at least 3 players deep.

Kalen Ballage looks like he can be that player. Ballage was one of Kevin Colbert’s unheralded free agent signings and brought a pedestrian resume to Pittsburgh. But he’s looked strong in preseason. Benny Snell, who began the summer as running back number 3, remains out with injury.

And while Jaylen Samuels looked strong against the Eagles, he didn’t play as well against the Lions.

Neither Melvin Ingram nor Alex Highsmith put up any gaudy stats against the Lions, but both men were around the ball. While no one is going to suggest that their performance gives the Steelers cause to stall in their contract negotiations with T.J. Watt, it looks like the Steelers have 3 viable outside linebackers.

One of the surprises of the 2021 off season was the return of JuJu Smith-Schuster. JuJu Smith-Schuster might have only had 5 catches against the Lions, but if you looked at his tape, you’d never have known he was playing in preseason.

In terms of pure talent, Chase Claypool and Diontae Johnson probably lead the Steelers wide receivers depth chart. But when it comes to heart and want to, JuJu and James Washington lead the way.