With the Steelers bye week upon us let’s delve into something that there simply wasn’t time for during the off season, namely The Athletic’s NFL Top 100.

The Athletic kicked off their series on July 8th with Derrick Brooks at 100 and closed it on September 8th with, you guessed it, Tom Brady at number 1.

And like most Steelers fans my focus was to see how well (or poorly) the Black and Gold fared. Fortunately, the Steelers did well, landing 8 players on the list:

(Technically you could argue the Steelers have 9, as Bobby Layne made the list at 89 and Layne played 5 seasons in Pittsburgh.)

Sure, one can quibble (as many did) over Troy Polamalu not making it while Ed Reed did. One could also protest Franco Harris’ absence. (Few did, even though Franco still owns several Super Bowl records and of course authored the Immaculate Reception, greatest play in the history of the sport.)

But no matter how you cut it, the Athletic’s writers clearly give the Steelers the respect they’ve earned.

The same cannot be said, however, for Troy Aikman. 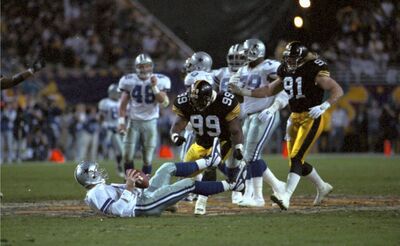 A Steelers Fan Takes up for Troy Aikman? Yes.

Troy Aikman remains only one of four quarterbacks to win 3 Super Bowls having pulled off that feat in 4 years failed to make The Athletic’s NFL Top 100 list.

It might seem odd for a Steelers fan to take up for Troy Aikman, let alone one who insisted that the ’89 Steelers would should regret not having a shot a drafting Aikman because “we’ve got Bubby Brister.” 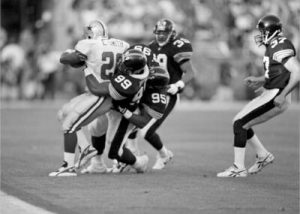 But he played a mistake free game, and he did it against the Blitzburgh defense. Sure, that Steelers secondary was stuck together with spit, duct tape and bubble gum, but that same defense made Emmitt Smith look like a mere mortal (OK, like a mere mortal except for when he was in the Red Zone – but there’s a reason why they called it the “Emmitt Zone” back then.)

“Ah, but performance in Super Bowls only goes so far….” Frankly, I’m not sure of that. A quarterback’s success or failure to get it done on the game’s biggest stage is one of the most critical metrics of his mettle. Terry Bradshaw would have zero justification for a place on this list had he not played so well in his Super Bowls.

It says here that all of the other quarterbacks discussed here as well as others not mentioned deserve a spot on The Athletic’s NFL Top 100. But if they do then Troy Aikman certainly does as well.

2 thoughts on “Steelers Represented Well in The Athletic’s NFL Top 100. Troy Aikman? He Got Screwed”