And the irony of it is, the Steelers were successful because, for once, things went as they were scripted. 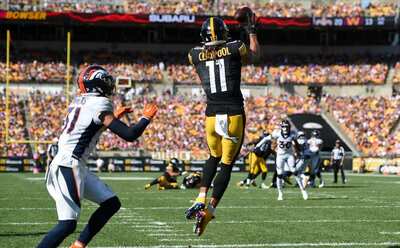 How Things were “Supposed” to Work for the Steelers

In mid-August my wife asked what the Steelers prospects were for the coming season. I assured her that, despite a fairly strong showing in preseason, the Steelers still “Needed a lot of things to go right.”

So what were those things that had to go right?

Almost nothing has gone according to plan for the Steelers in 2021.

The last three weeks saw Ben Roethlisberger thr0w 40, 58, and 40 passes. In week one Ben got it done with 32 passes. Funny how that one ended in a win. The offensive line struggled, and if it hadn’t been worse than it was in 2020, it wasn’t showing signs of getting better.

Injuries hobbled the defense and young players whom the Steelers were counting on performance spanned from, “He might be taking a step back” to “he’s improving, but only marginally.”

And so it was that the Steelers opened with two straight runs to Najee Harris. One 3rd and 1, with the defense forced to respect the threat of another Harris rush, Ben Roethlisberger hit Chase Claypool for 23 yards. The Steelers followed with a Jet Sweep to JuJu Smith-Schuster and two plays later Ben Roethlisberger was hooking up with Diontae Johnson on a 50 yard touchdown.

So an early TD was welcome, but as the loss to the Packers proved, how you begin isn’t nearly as important as how you finish. But by sticking to a tried and true formula for “Steelers Football,” Pittsburgh had given itself a fresh start. 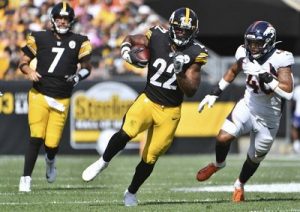 Harris Grinds it Out

The next two drives saw the Steelers run 19 plays. The first drive ended in a fumble, the second one in a field goal. Pittsburgh rushed the ball on 11 of those 19 plays. While you’d like to see a little more from you offense, the Steelers were accomplishing something important:

The offensive line might not have been engaging on road grading quality run blocking, but they were opening holes and Najee Harris was exploiting them. That allowed plays like Chase Claypool’s 59 yard hook up from Ben Roethlisberger, that got them into the Red Zone and paved the way for Najee Harris air mail express 1 yard touchdown leap.

The trend continued in the second half, as the Steelers set themselves up for success by creating manageable third downs and stitched together a 14 play 88 yard drive that consumed 7 minutes of the clock and ended with Chase Claypool going over the top to put the Steelers up 24-6 with 2:41 left to play in the 3rd quarter.

By that point, Najee Harris had logged his first 1 yard game and the Steelers first 100 yard rushing effort in 16 games.

But the game wasn’t over yet.

The Steelers defense dominated the Broncos offense for 3 quarters. Their efforts early in the game were critical to victory. After an early Ben Roethlisberger fumble gave the Broncos the ball at Steeler 29 yard line.

Two possession later, Javonte Williams torched the Steelers offense for 49 yards as James Pierre barley saved a touchdown. That set up Denver at the Steelers 5 yard line, but Devin Bush dropped Teddy Bridgewater for a 12 yard sack, effectively forcing them to settle for 3 again.

But as the third quarter ended the Broncos offense found their stride and gave the Steelers defense a run for its money.

Defense Finally Bends, Breaks but Bounces Back in a Big Way

When the Denver Broncos got the ball with 2:14 left in the 3rd quarter they were down 24 to 6 and things looked pretty hopeless. But they stitched together a 14 play, 76 yard touchdown drive that saw them convert 3 fourth downs.

While you never want to see something like that happen, the Steelers don’t have the shut down defense they had in 2019 or 2020 and such efforts are to be expected, if not accepted 2021 in the NFL.

This gave Denver the ball back with 7:40 left to play and it was in those seven minutes and 40 seconds that the Broncos would test one of the Steelers biggest gambles of the season to the limit.

First, Denver reached midfield by picking on James Pierre for a 15 yard completion. Two plays later Pierre bit a little too hard on the inside to Courtland Sutton as Sutton burned him for a 39 yard touchdown pass.

The Steelers defense nixed the 2 point conversion and the offense tacked on a field goal to keep it an 8 point game, but Denver got the ball back with 2 and a half minutes to play. As soon as he got in scoring range, Teddy Bridgewater wasted little time in picking on James Pierre. Pierre deflected it but could have ended things with an interception.

Joe Haden and Terrell Edmunds knocked away passes on 1st and 3rd downs with Joe Schobert tackling Melvin Gordon short of the goal line on second.

One 4th and 9 Bridgewater again tried to pick on Pierre. Here’s Pierre’s response:

The story of the first three quarters was that, for one game at least, the Steelers offense functioned the way it was “supposed to.”

The story of the fourth quarter was that, when the game was one the line, the gamble the Steelers made in James Pierre paid off in spades.

No NFL team wants to start the season at 2-3, but 2-3 beats the hell out of 1-4. As Mike Tomlin reflected: “Time will tell the story. We are appreciative of the efforts and the win we got today, but those type of perspectives and things of that nature will be revealed to us as we continue to play.”