There’s a certain symmetry to the Steelers 2021 bye week. They entered the bye after a game against the Seattle Seahawks and exit it playing the Cleveland Browns.

That’s fitting because the transition to the post-Ben Roethlisberger era began against the Seahawks in 2019 and the Hindenburg Rescues the Titanic playoff debacle against the Browns confirmed that Big Ben has reached his 11th hour.

So the bye week gives us an excellent opportunity to take stock of where the Steelers stand in terms of that transition. 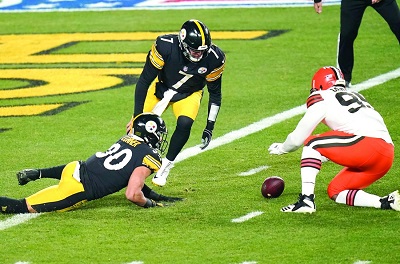 Quarterback
Stronger than in 2019, even since late 2020. When Ben Roethlisberger’s elbow popped, Mason Rudolph had never thrown an NFL pass and Joshua Dobbs had just been traded. Ben Roethlisberger hasn’t been as erratic as he was in the playoffs, yet he’s lacked the same spark we saw as recently as the Colts game.

Running Backs
Stronger today. Period. Najee Harris is arguably the most talented player on offense, and the depth behind him is stronger than it was in 2019 or at any point in 2020.

Tight Ends
Stronger than in 2019, weaker than 2020. Vance McDonald was ailing in 2019, Xavier Grimble was showing he couldn’t cut it and the Steelers had to trade for and start Nick Vannett in the same week. Last year the Steelers still had McDonald and Eric Ebron, plus Kevin Radar. On paper this group isn’t as strong, but Pat Freiermuth and Zach Gentry improve every week.

Wide Receiver
Stronger than in 2019, weaker than in 2020. In 2019 the Steelers had JuJu Smith-Schuster, rookie Diontae Johnson, Ryan Switzer (oh, did you forget Donte Moncrief? So did everyone else.) The Steelers returned the same wideout corps as last year, but have lost JuJu, weakening them considerably.

Offensive Line
Weaker than in 2019, stronger than in 2020. While it wasn’t quite apparent, the offensive line’s decline had begun in 2019, but it was still providing good pass protection. A year ago the unit was falling apart. While it is far from a strength, the unit has improved since the beginning of the season.

Linebackers
Weaker than 2019, but stronger than 2020. Bud Dupree was blossoming in the fall of 2019, and Devin Bush was authoring a strong rookie year. T.J. Watt was T.J. Watt and Vince Williams held down the center. IN the playoff last year, T.J. was playing alongside Avery Williamson, Cassius Marsh and Marcus Allen (Ok, Marcus Allen only played 8 snaps. But as Tim Van Patton taught us in the 70’s 8 Is Enough. Yeah, that’s bad, but you get the point, don’t you?) While Devin Bush has been shaky and Alex Highsmith is finding his legs, I’ll take this quartet over the group on the field during the playoffs.

Secondary
Stronger than 2019, stronger than in late 2020. Truthfully, the Steelers secondary got A LOT better following the 2019 Seahawks game thanks to the Minkah Fitzpatrick trade. And that secondary might have been stronger than this one, but with Joe Haden was out against the Browns, and he’s back now. Nuff said.

Special Teams
About even. After a bad 2018 campaign, Chris Boswell has been back. While Pressley Harvin has been uneven, he has more upside than Jordan Berry.

What Does It All Mean? Give the Pre-Game Edge – Browns

Since the playoff debacle, Steelers have strengthened themselves at running back, offensive line, linebacker, and in the secondary. Unfortunately they’re weaker on defensive line and the Browns road grading rushing attack is well suited to exploit this weakness.

The Steelers can win this game, but their ability to do so hinges on their defense and/or special teams delivering some potent fireworks.