The one thing that was annoying about the Steelers’ 27-19 victory over the Broncos at Heinz Field on Sunday was the vantage point during extra point and field goal attempts at one end of the stadium.

I don’t know if it was because the game was on Fox, which prevented me from enjoying an HD viewing experience, but whenever Chris Boswell lined up to attempt a kick and the kick was broadcast from a camera in the opposite end zone (or behind Boswell), I had a hard time finding the ball once it was launched toward the goalposts.

With each kick, I had to wait an extra second or two for the in-stadium crowd to react. If I heard cheers, I knew Boswell’s kick was true. If I heard nothing, I knew he had missed his mark. 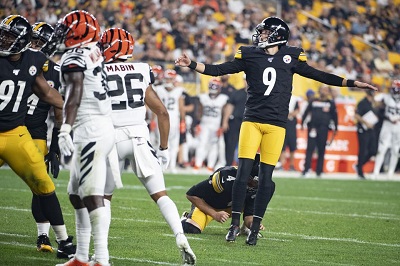 Fortunately for me, I had already assumed I would hear cheers as soon as Boswell connected with foot to ball. Why? The man’s been money for most of his career as the kicker for the Steelers, that’s why.

Chris Boswell may never be placed in the same category as Gary Anderson or Jeff Reed as an all-time great Steelers kicker, but he actually is the best to have ever done it in a Steelers career that began during the 2015 campaign, when he was a midseason replacement for the struggling Josh Scobee, who was a training camp replacement Garrett Hartley who was himself an injury replacement for the injured Shaun Suisham.

Boswell connected on 29 of 32 field-goal attempts during his inaugural season with the Steelers and even made the game-winning kick in the final seconds of the wild wild-card win over the Bengals at Paul Brown Stadium.

One year later, in the divisional round of the 2016 postseason, Boswell was the only scoring the Steelers could muster, as he kicked six field goals in an 18-16 win over the Chiefs at Arrowhead Stadium.

Even though receiver Antonio Brown won the award, you could make a case for Boswell as the Steelers MVP in 2017, as he connected on 35 of 38 field-goal attempts, including several game-winners down the stretch to help Pittsburgh win 13 games and the AFC North crown.

Boswell earned a trip to his first Pro Bowl following the 2017 campaign and a new, multi-year contract right before the 2018 regular season was about to kick off.

Unfortunately for Boswell, 2018 would be the worst year of his career; in fact, things immediately started to fall apart in Week 1 with a missed field goal in overtime in a game that ultimately ended in a 21-21 rain-soaked tie at Cleveland.

I don’t know if that missed kick against the Browns affected Boswell’s psyche, but he would go on to miss seven field goals and five extra points in 2018 and repeatedly failed to pull the Steelers out of the same close jams that he did one year earlier. Pittsburgh collapsed down the stretch and missed the postseason with a 9-6-1 record. Was Boswell dealing with some sort of injury all throughout the 2018 campaign? We do know he was placed on Injured Reserve prior to Week 17 after reportedly suffering a torn groin muscle in a game against the Saints.

After some talk of releasing Chris Boswell and his contract during the 2019 offseason, the now veteran thankfully returned to his old form and connected on 29 of 31 field-goal attempts during the regular season.

Boswell remained consistent in 2020, connecting on 19 of 20 field-goal attempts and even set a franchise mark with a 59-yard boot against the Cowboys in Dallas.

Speaking of records, Boswell kicked the longest field goal in Heinz Field history earlier this season when he made one from 56 yards in a Week 2 game against the Raiders on September 19.

Unlike in the days of Gary Anderson, it’s much harder for kickers to distinguish themselves these days, and most are expected to have an accuracy rate at or close to 90 percent.

Chris Boswell may not get talked about or celebrated in the same fashion as less-accurate Steelers kickers from the past, but he’s clearly the greatest one to ever boot balls for the organization.