The Steelers 29-27 win over the Chicago Bears on Monday Night Football conjures many different descriptions.

Do you agree with these descriptions? Good. So do I. But there’s another, better word we can use: “Marginal.” Marginal certainly isn’t as colorful. “Marginal” also holds a neutralish if negative connotation. But Bears win on Monday night shows us that the 2021 Steelers might actually be able to use that to their advantage. 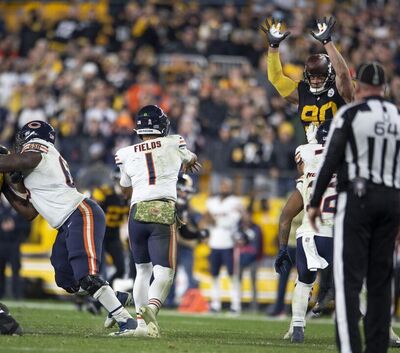 Given this win’s last second nature, it is easy to forget the Steelers left a lot of positive takeaways in this game, especially early on.

He’s clearly gaining a feel only for his player’s abilities but he’s also adept at applying those strengths to exploit opposing defense’s weaknesses. On their first possession, the Steelers marched down the field, literally just as Canada had scripted it. 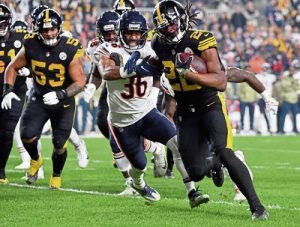 And if the drive following Cam Heyward’s interception wasn’t quite as smooth, it did only take ten plays for Ben Roethlisberger to find Pat Freiermuth in the end zone for another touchdown to start the 2nd quarter.

Sure, the Bears eked out a field goal late in the second quarter, but as the Steelers entered the locker room at half time, one couldn’t help but imagine Mason Rudolph taking the field in the early 4th quarter….

If the first quarter proved that Matt Canada can scheme with the best of them, the next three quarters proved that his offensive line remains a work in progress. The Steelers offensive line lost the battles up front, leaving Najee Harris no where to run.

Credit Canada for innovating and using jet sweeps to gain yards on the ground. James Washington, Diontae Johnson and Claypool carried the ball 6 times and gained 37 yards in the process. While this helped keep the defense honest, the Steelers offense couldn’t put the game away because their offensive line was getitng manhandeled.

To recap, with about 7 minutes left to play, T.J. Watt had sacked Justin Fields. Even if the Steelers run 3 plays for zero yards, Pittsburgh probably burns at least 2 and a half minutes off of the clock. A single first down in that situation could seal victory.

Instead, the Steelers let the Bears right back in the game.

And Chicago was only too happy to take them up on their invitation.

Chicago’s comeback did not happen in a vacuum. Justin Fields, after struggling for much of the first half, played lights out late in the game. The Steelers defense struggled to slow the Bears.

That’s both good and bad for the Steelers.

Its also worrisome because the Steelers gave up the house to draft Devin Bush in part to have a player capable of containing Jackson. Bush, who left the field on third downs, doesn’t appear to be capable of that at this point.

A “Marginal” Victory? Yes. But History is Made in the Margins

To a man, Mike Tomlin, Cam Heyward and Ben Roethlisberger all admitted that, victory notwithstanding, things must improve. And the hard truth is, that if you take a hard dispassionate look at the struggles at the line of scrimmage, Ben Roethlisberger’s difficulty throwing down field and the ease at which the defense gave up points late, its difficult to envision this team sustaining a playoff run, much less hosting the Lombardi.

But if that’s true, then think back to some of the outlying plays that the game turned on:

Football is a game of inches. That’s another way of saying that victory or defeat often comes down to which team can master the little things, that fall in the margins.

This Pittsburgh Steelers team might be developing a knack for doing just that. Which is good. Because history is made in the margins.