The location was Cleveland, the day Halloween. The teams were the Steelers and the Browns. The stakes were avoiding the division basement. And Pittsburgh triumphed 15-10 in a game worthy of the old AFC Central.

The victory puts the Steelers within striking distance of the AFC North lead and extends their winning streak to 3. But the real take away from the game lies in how the Steelers won: By focusing on fundamentals and maintaining discipline. 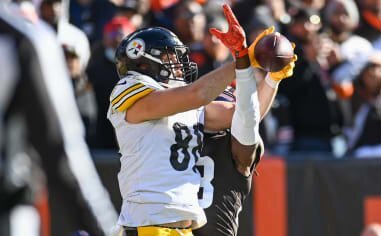 Strange Things Happen in Cleveland. But This was Just a “Side Note”

Strange things happen when the Steelers play in Cleveland. Seldom are they good.

Joe “Turkey” Jones once pile drove Terry Bradshaw in a late hit. Dwight White once warned rookie Tunch Ilkin to wear his helmet at all times lest he get hit with a battery. Ilkin took the veteran’s advice. Leroy Hoard once got decked in the end zone, only to have pass, that deflected off of several players, literally land in his lap for a touchdown.

Jerry Olsavsky blew out 4 ligaments there and got pelted by the Dawg Pound with beer bottles as he was removed on a stretcher. The same game saw the Steelers dominate in every phase, yet lose thanks to 2 Eric Metcalf punt returns.

In 2012, the Steelers fumbled the ball 8 times, lost 5 of them, while Charlie Batch threw 3 interceptions.

And so it was that Mike Tomlin, instead of taking a near-certain field goal for the lead late in the first half, opted for a fake. And so it was that Chris Boswell, who’d been 1-1 and a 1 touchdown as a passer, not only threw an incompletion, but got a concussion on an illegal hit.

But this latest “strange thing” ended up being a “side note” instead of a defining moment largely because of the work Tomlin and his staff had done during the week.

Going into this game, if you’d have said it would revolve around the fundamentals of blocking, tackling and simply hitting or pushing harder than your opponent, the smart money would have favored the Browns.

The Browns are the NFL’s best rushing teams. They do it by winning the battles upfront which allows Nick Chubb to reach the second level just as he’s hitting his stride. You counter teams like this by putting 8 men in the proverbial box. But, as The Athletic’s Mark Kabloy explained:

The Browns have been outstanding against eight-man fronts. The majority of the time the Browns have countered with two tight ends. Still, they average a league-high 4.69 yards per carry when at least eight are in the box. 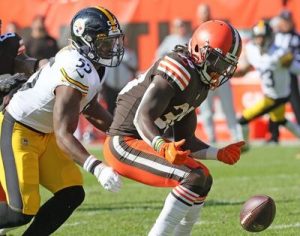 Perhaps the Browns outsmarted themselves a bit, opening by throwing more than running. But in the end it didn’t matter. The Steelers shut down Nick Chubb. Devin Bush stopped him once at the goal line and then Bush plus T.J. Watt did it again on 4th down.

Taking Chubb out of the game put the onus of moving the offense on to Baker Mayfield. Mayfield, playing hurt, did make some courageous plays, but the Browns were 3-10 on 3rd down and 0-2 on 4th down.

Offensive innovation is in vogue. Everyone likes creative formations and deceptive use of motion. And who doesn’t love a good gadget play? To be certain Matt Canada’s clever play calling helped carry the day.

Matt Canada didn’t try to dazzle the Browns with smoke and mirrors. Sure, he gave 3 carries to Chase Claypool and Ray-Ray McCloud, and those plays helped open up the offense. But Canada executed a conservative game plan designed to limit the damage Myles Garrett could do.

Even though Najee Harris was only averaging 3 and a half yards per pop, the Steelers stuck to the run and that kept the Browns defense honest, allowing Ben Roethlisberger to quietly author his best game of the season, which included a spectacular 50 yard hook up with Diontae Johnson. Johnson not only flipped the field, but had the discipline to stay in bounds, essentially sealing the game.

“Discipline.” There’s that word again. If the Steelers ability to stay in their gaps on defense and make tackles was critical winning the game, but Pittsburgh’s superior discipline was the difference maker.

Clinging to a 1 point lead early in the 3rd quarter, the Browns faced a 4th and at midfield. Cleveland lined up with Mayfield going into the hard count, trying to force a penalty. Playing from behind, on the road in front of fired up fans, the Steelers defense could have flinched easily.

Discipline was critical on the next drive, and Ben Roethlisberger on 4th and goal, waited patiently, and then hit Pat Freiermuth who not only had the concentration to catch a very contested catch, but also got his foot in bounds for the touchdown.

8 plays later, a lapse of discipline would undo the Browns, as Joe Schobert knocked the ball lose from Jarvis Landry, as T.J. Watt recovered. The Steelers punted 3 plays later, but the clock was ticking.

Finally, with the Browns sitting on the Steelers 25 yard line on 3rd and 12, Rashard Higgins committed a false start, knocking Cleveland back 5 yards. They got four of them back, but Minkah Fitzpatrick saw to it that Mayfield’s 4th down pass to Jarvis Landry fell incomplete.

When asked about what this game means to the team Mike Tomlin explained:

Its days like today that kind of gives you an indication of what you could be. We’ll continue to write that story positively or negatively, but today was a good day.

He is right. The Steelers will continue to write their story. But fortunately, for the first time since the opening day win against the Bills, the Steelers story is a tale of more wins than losses.

Yes, today was a good day.