Taken from the grade book of a teacher who is pleased as punch that his pupils aced AFC Central history this week, here is the Pittsburgh Steelers Report Card for the 2021 win over the Browns at First Energy Stadium. 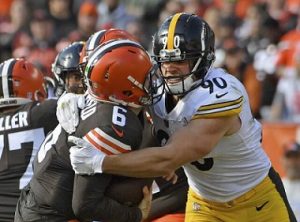 Quarterback
Ben Roethlisberger quietly authored his best game of the season going 23-34-1-0 for 266 yards. He did it against the NFL’s best pass rusher. And while he did have one should-been an interception, he did not turnover the ball. He also managed 7.8 yards per attempt, just a hair below his career average, without throwing a pass longer than 16 yards. Grade: B+

Running Backs
Najee Harris had 96 yards on 26 carries and if the average isn’t great, he again got better as the game wore on, including willing himself into the end zone. Anthony McFarland saw his first action of year and will need to do more than one yard gains if he wants to see more. Kalen Ballage carried once for a loss. Grade: B

Tight Ends
Ben Roethlisberger targeted Pat Freiermuth early and often, targeting him four times on the opening drive. Pat Freiermuth only caught one of them, but he caught 3 of the next 4, including a 22 yarder that set up a touchdown, and of course the touchdown itself which was a “Lynn Swann” catch if there ever was one. Zach Gentry caught 3 passes in the second half, both on scoring drives. Eric who? Grade: A

Wide Receivers
Both Chase Claypool and Ray-Ray McCloud made some noise running the ball, with Claypool catching 4 of 5 balls thrown his way. Diontae Johnson was 6 for 13 on catches to targets, but his 50 yard reception to seal the game was a thing of beauty. James Washington caught 1 pass for 4 yards on one target. Grade: B

Offensive Line
Myles Garrett may be many things to Steelers fans, but one of this is not to be underestimated. Rookie Dan Moore got the task of containing Garrett and, quite frankly did an admirable job as Ben Roethlisberger was only sacked twice and hit 5 other times. Run blocking also continues to improve, although Najee Harris did have to make something out of nothing more than once. Grade: B

Defensive Line
Everyone expected Cam Heyward to show up against the Browns. But so did Chris Wormley, Isaiahh Loudermilk, Henry Mondeaux and Isaiah Buggs and the quartet delivered a far higher level than anyone had a right to expect them to. Grade A

Linebackers
The stat sheet suggests T.J. Watt had an off day, as he “only” had 1.5 sacks and 3 QB hits. Of course his first half sack killed a 4th down conversion and his second came with 1:13 left to play in the first half. He also killed another 4th down conversion with a tackle for a loss. And he recovered a fumble. Alex Highsmith had another good day, including a key tackle on Cleveland’s last drive. Devin Bush had 5 tackles, but at least two of them killed drives. Grade: A 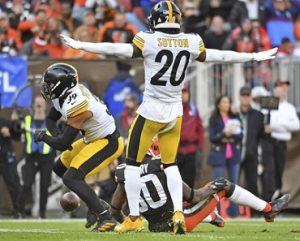 Secondary
The Browns were able to complete some passes early in the game, but their 3 for 10 3rd down conversion rate shows they couldn’t sustain drives. Joe Haden had a pass defensed and Cam Sutton had a tackle for a loss. Minkah Fitzpatrick had a more solid game and delivered some “Minkah Magic” breaking up a pass to Jarvis Landry in the Red Zone on 4th down with less than 2 minutes to play. Grade: B

Special Teams
The Steelers botched the extra point attempt badly, at the very least Chris Boswell should have been coached to throw it away quickly if the play began to unfold badly. That obscures the fact that Ray-Ray McCloud had a good day returning kicks and that coverage units were solid. Grade: B-

Coaching
Outsmarting oneself is the biggest temptations that all offensive coordinators must resists. Too often coordinators get too impressed with their own schemes (see Joe Walton, Kevin Gilbride). Matt Canada resisted that temptation.

To be sure, he used misdirection on motion and Jet sweeps to keep the defense honest, but he committed to a game plan grounded in the fundamentals of physical football and that carried the day.

Before the game Keith Butler admitted that he was going to sellout to stop the run and he kept his world. The Steelers defense had been stout thus far this season, but the Seattle game opened the question as to whether the run defense was their “soft underbelly.”

1-3 NFL teams sit on lonely islands. And here in 2021 it isn’t just fans that start to focus on the draft and free agency, but so do agents and scouts. Meanwhile, assitant coaches start polishing their resumes double checking their lease opt out terms. 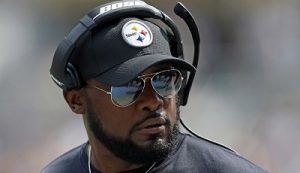 knows this, yet he’s kept his team focused through this three game winning streak, earning his third win against a team that whipped him at Heinz Field just 8 months ago.

As Tomlin himself confided “…days like today that kind of gives you an indication of what you could be.” More importantly, he was also quick to concede that much more story is needed to be written. Grade: A-

Unsung Hero Award
Playing on a defense with no fewer than 6 first round picks means you’ll have to compete for highlight footage. And the fact is that, while “Splash” plays do turn games, the every down stops are just as important. This player has been making those all season and he continued to do so against his former team, while also coming up with a forced fumble right at the Red Zone, and for that Joe Schobert wins Unsung Hero honors for the win over the Browns.