Question: Entering the Chargers game, which injures have hurt the 2021 Pittsburgh Steelers the most? There’s no definitive answer, but this blogger offers an unorthodox suggestion:

Injuries, as the late, great Washington DC area sports radio journalist Ken Beatrice reminded listeners, are just as much of a factor as talent and coaching. This was true for the NFL during the 70’s, 80’s and 90’s and is even more true today.

The Steelers certainly missed Ben Roethlisberger against the Lions and Justin Herbert will force them to miss Minkah Fitzpatrick just as dearly tomorrow. And anyone who has seen the Steelers run defense lapse could and should point to the absence of Stephon Tuitt and Tyson Alualu.

So if those are your answers, you’re in good company, just as is anyone who brings up T.J. Watt’s name. But my two choices are Devin Bush and Zach Banner.

Banner and Bush don’t share a lot in common, but both men suffered ACL tears during the 2020 season.

The Steelers failure to use him on Sundays has drawn frustrated “Whys” as Dan Moore and Chukwuma Okorafor have had their struggles. Devin Bush has of course played all season, but he hasn’t been the same. This has led even level-minded reporters to go as far as to question the Steelers decision to trade up to get him.

The frustration with Banner and Bush is understandable, but perhaps misguided.

Once upon a time, an ACL tear could spell doom for a professional football player. Anterior cruciate ligament sent the legendary Gale Sayers career on the path to ruin. Fortunately, with the rise of arthroscopic surgery, and improvements in rehabilitation therapy, ACL tears stopped being an immediate threat to a player’s career.

In fact, Pittsburgh Steelers Hall of Famer Rod Woodson was the first NFL player to tear his ACL in a season, only to return later that year. 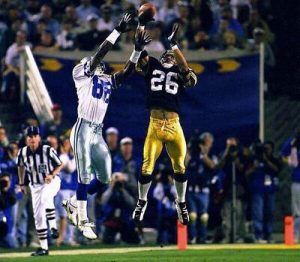 Not only because Woodson’s feat remains rather unique, but because it came with a cost. As Woodson confessed to Jim Wexell in Men of Steel, returning for the Super Bowl was “‘not the smartest thing to do'” continuing he adds, “‘I was probably 45-50 percent healthy at that point.'”

Woodson of course returned for the Steelers 1996 season and in the home opener he returned Vinny Testaverde’s first pass 43 yards for a pick six. Woodson made the Pro Bowl in 1996.

Wrong. Woodson confided this to Wexell, “’In ’96, I was still sore, and then my Achilles started acting up a lot, just from compensating for my knee….’” Woodson left the Steelers after 1996, but went on to play in 7 more years, making 4 Pro Bowls and one All Pro Team will appearing in two more Super Bowls.

Wrong again. While admitting to struggling a bit in San Francisco, Woodson explained, “’I was still trying to recover from the knee a bit, even that second year.’”

And while players like Casey Hampton and Heath Miller returned for a productive seasons after suffering ACL tears late in the 2011 and 2012 campaigns, it is easy to forget just how fortunate they were. Shaun Suisham suffered an ACL tear during the 2015 Hall of Fame game that ended his career.

Are Bush and Banners ACL Tears Lingering On?

It is hard to really say how much impact Zach Banner’s absence has had on the offensive line. He won the starting job in 2020, only to tear his ACL in the season opening win over the Giants. Which is to say, he’s largely an unknown commodity.

Bush had a strong, if not fantastic rookie year in 2019 and was playing well early in 2020. So far in 2021 he’s been a non-factor. Is it because he’s still not fully recovered from his ACL tear? It is hard to know for sure.

Some film analysis of the Lions game suggests he was badly out of place on some of those critical runs the Lions used to gouge the Steelers defense. That was only one play, however, and Bush was far from the only person on the Steelers defense out of position (see Joe Schobert and Cam Sutton.)

People’s bodies heal differently and at distinct paces. Modern medicine has done a lot to make ACL tears more manageable for NFL players, but if something seems not quite right with Devin Bush, just remember that even in 2021 anterior cruciate ligament injuries anything but trivial.