Since we’ve actually reached the month of November (so hard to believe), and the Steelers 2021 regular season is now seven games old, you’d think most folks would have long since forgotten about what took place during the 2021 NFL Draft last spring. 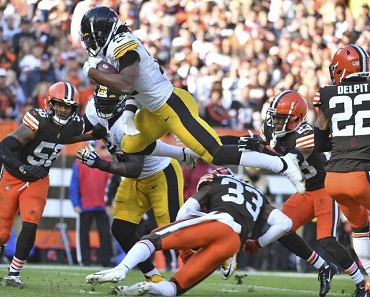 People are still fretting about how the Steelers should have drafted an offensive lineman in the first round and how running backs are a dime a dozen. And even if you’ve now grown to accept the fact that Pittsburgh decided to select Najee Harris, running back, Alabama, 24th, overall, damn it, why didn’t the team take center Creed Humphrey, center, Oklahoma, one round later when he was still ripe for the picking?

Did you see Sunday’s game, a 15-10 victory over the Browns at Cleveland’s FirstEnergy Stadium? Did you witness the powerful runs by Harris and his Walter Payton-like leap into the end zone from about the four-yard line? Did you notice who scored the other touchdown? That’s right, it was Freiermuth. Did you appreciate the body control and the concentration, as he fought off the Browns’ defender, cradled the football and got both feet in bounds before falling to the turf?

A center couldn’t have scored either one of those touchdowns. You might argue that a running back and tight end drafted much lower still may have, but I wouldn’t bet on it.

The Steelers were smart in selecting them, and I get the feeling it’s going to continue to pay off for them for quite some time.

As for the offensive line that was very much in need of an infusion of young talent, Kendrick Green, the center Pittsburgh selected out of Illinois in the third round, has been starting since Day 1. Dan Moore Jr., the left tackle drafted out of Texas A&M in the fourth round, surprised everyone with his development over the summer and has also been starting since Week 1.

Yes, he’s undersized. He’s also green (no pun intended). He barely played center in college. But what I like about Green is that he’s not afraid to push back. Same for Moore, who clearly had his hands full on Sunday while trying to block Myles Garrett (Moore probably wished he had another pair of hands in order to deal with Garrett). But Moore survived. If he can get through a game against perhaps the best edge rusher in the NFL, he can get through anything, right?

So, just to be clear, the Steelers went into the 2021 NFL Draft in need of a running back, a tight end and multiple offensive linemen. They addressed all four areas with their first four picks and all four selections have contributed heavily to the Steelers’ offense through seven games.

If that’s not enough, Isaiahh Loudermilk, a defensive lineman who the Steelers traded a 2022 fourth-round pick to the Dolphins in order to draft in the fifth round, is starting to make strides and turn heads. Tre Norwood, a Swiss Army Knife of a defensive back who the Steelers drafted in the seventh round, has been more than a valuable member of the secondary so far in his rookie season. Oh yeah, and Pressley Harvin III, the punter out of Georgia Tech who Pittsburgh also selected in the seventh round, won the job over Jordan Berry in training camp.

Throw in Buddy Johnson, an inside linebacker from Texas A&M who made the team as a fourth-round pick, and that’s quite a successful 2021 draft class. To review: the Steelers 2021 draft class consisted of nine players. Eight made the team, five are already starting (a punter is considered a starter) and seven are contributing heavily.