The Steelers-Chargers Sunday Night Game had it all:

Yes, the game had it everything, but in the end everything was not enough as the Steelers fell to the Chargers 41-37 in their first trip to SoFi Stadium. The Steelers first loss in 41 days drops their record to 5-4-1, while Mike Tomlin’s uncharacteristic response reveals a lot about how he sees the rest of 2021 unfolding. 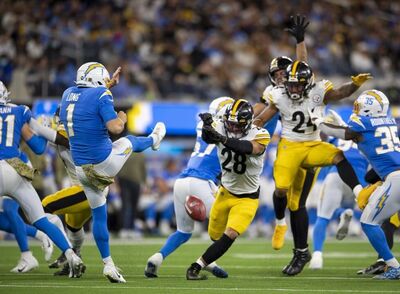 Steelers Can’t Run. Chargers Can, Without Even Trying

The first half ended with a 17-10 advantage for the Chargers. Although a 7-point half time deficit is hardly cause for panic, if it felt like San Diego er um Los Angeles was in charge, its because they were.

On Pittsburgh’s second possession, Chase Claypool had brought the Steelers to the Chargers 5, but Pittsburgh failed to punch it in. An end around by Claypool yielded 3 yards while a rush up the middle by Najee Harris delivered none. Mike Tomlin opted to pass on third and 4th downs and the Steelers misfired on both, getting no points for 73 yards.

Justin Herbert accounted for 40 of those yards on four unplanned scrambles were just as easy as they looked. The Steelers couldn’t rush the ball while the Chargers could, even when they weren’t trying to.

By the time a Cameron Sutton penalty gave Dustin Hopkins a do over field goal that he converted for 41 yards, the Chargers had a 17 point lead owith just 18 minute left to play.

For all intents and purposes, the game seemed to be over.

Give the Men in Black and Gold Credit for Something

Let’s be blunt. You can talk all you want about professionals football players being paid millions to play a boy’s game. The truth is that a lot of teams facing a 17-point deficit, at night, on the road, with just over a quarter to go would mail it in. The allure of the showers, of getting out of the stadium and on to the plane becomes too strong. 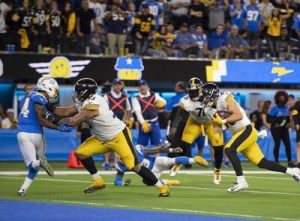 The Steelers responded to the Chargers field goal with one of their own. On the next drive the Steelers defense did something it hadn’t done all night – force the Charger to punt. For the record, Ray-Ray McCloud returned the punt for 12 yards.

Ah, but off setting penalties forced a re-kick, which Miles Killebrew blocked, igniting the Steelers 24-point 4th quarter explosion. (Note, the Steelers also scored 3 points in the 4th prior to the blocked punt.)

Symmetry within the Number 3 Dooms Steelers

That 24-point explosion was entertaining. It would have been something really special had it not been broken up by 14 points scored by the Chargers. Or by Kyler Fackrell and Joey Bosa book ending the 2 minute warning with 8 and 11-yard sacks of Ben Roethlisberger.

Those there the only 3 stops the unit had in them. I suppose that’s an odd sort of symmetry for a Steelers defense missing 3 starters in the form of T.J. Watt, Joe Haden and Minkah Fitzpatrick. At the end of the day the Steelers couldn’t get pressure – or containment – of Herbert without Watt.

And if James Pierre did a fine job of filling in for Haden, that forced Tre Norwood out of his slot position and into Minkah’s which is how you get a 53 yard walk off touchdown to Mike Williams with just over 2 minutes remaining.

Factor in Joe Haeg playing for an injured J.C. Hassenauer was in for an injured Kevin Dotson which opened the door to the Chargers final sacks. The Steelers simply didn’t have the players they needed to compete.

Once upon a time, Mike Tomlin would have scoffed at a long injury list with “The Standard Is the Standard.” But after the game he explained, “We have to get back to the drawing board and do a better job of putting them in positions to be successful with the people that we have at our disposal.”

Don’t bet on it. Mike Tomlin is taking the blame upon himself because he doesn’t want criticism contaminating the spirit and attitude of a promising young crops players.

The fight they showed in the 4th quarter suggests Tomlin is right. We’ll find out over the next 7 games.