Taken from the gradebook of a teacher who hopes his students can use this as a learning experience but fears they may have just hit their peak, here is the Steelers Report Card for the tie against the Lions. 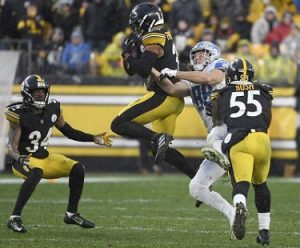 Oh, what could have been. Photo Credit: Chaz Palla, Tribune-Review

Quarterback
Anyone still wonder why the Steelers opted to bring back a dismissed Ben Roethlisberger? Mason Rudolph did not play poorly, completing 30 out of 50 passes for one interception and another touchdown. But Rudolph also missed on some throws the Steelers needed him to make. Grade: C-

Running Backs
Najee Harris ran for 105 yards on 26 carries. While 26 carries perhaps a few more than you’d like to see his four yards per carry average indicates that perhaps they should have leaned on him more. If Benny Snell’s lone carry for four yards is any indicate, he could have been used to spell Harris. Derek Watt actually caught a pass for nine yards. Grade: B

Tight End
Mason Rudolph largely avoided the middle of the field, limited the tight ends a bit. Eric Ebron caught 2 passes for 13 yards while Pat Freiermuth caught 5 passes for 31 yards, but he unfortunately fumbled the ball away in overtime. Grade: D

Wide Receivers
The Steelers have done well in combat catches this season, but both Diontae Johnson and James Washington lost contested balls. Ray-Ray McCloud showed why Mike Tomlin kept him after his fumble as he pulled in 9 catches. Johnson showed impressive presence of mind getting out of bounds during overtime, but this happened after he fumbled the ball on a field-flipping play. Grade: D

Offensive Line
Mason Rudolph was neither sacked nor hit during the entire game, per ESPN’s statistics. And, as mentioned, Harris had good room to run. Grade: B+

Defensive Line
For about 20 minutes, the Detroit Lions ran through the Steelers defense like they were indeed live lions charging through lines of Christians in the Coliseum. That is decidedly NOT the fault of the line, but it starts there. Cam Heyward came up with a monster sack at the end of regulation and another one in overtime. Grade: C-

Linebackers
T.J. Watt was awfully quiet in this game until sacking Jared Goff for a 6 yard loss – a play on which he got hurt. Alex Highsmith came up big with two big tackles for losses late in the 4th quarter. Still, the Lion ran at will for a time and Devin Bush and Joe Schobert don’t deserve all of the blame for that, they duo is charged with guarding the middle of the defense. Grade: D

Secondary
Minkah Fitzpatrick symbolizes what this game could have been. His nullified interception should have decided overtime, yet his missed tackles helped dig the Steelers into the hole. James Pierre did well in place of Joe Haden. Terrelll Edmunds overtime sack should have turned the game. Grade: C-

Special Teams
Kalif Raymond 48 yard punt return awakened the Lions and set up their first touchdown, a 28 yard romp that would get Detroit believing they could win the game. That wasn’t a lone play as averaged over 11 yards on his next returns. Steelers kick coverage was shaky too.

Chris Boswell was 3-3 on field goals including a 51 yarder in the rain, which pulls the grade for Danny Smith’s group up. Grade: C-

Coaching
For the first time this season, Matt Canada’s play calling led to some head scratching. We can accept that the reads on RPOs in the Red Zone were correct based on 5 Detroit defensive lineman on the field.

Was Canada trying to do more through the air because he thought Rudolph was more capable (with fewer receivers BTW?) Did he want to see Rudolph prove himself? Regardless of his motive, his game plan was questionable in theory and failed in practice.

The Lions running game was unstoppable for a quarter. Most of this was due to poor tackling, but that is hardly an excuse. 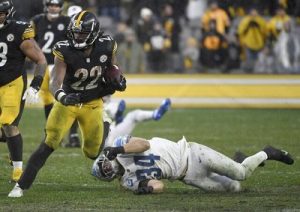 Finally, this column has credited Mike Tomlin when his players refused to “blink” with the game on the line. In overtime his defense did the same in this game. The offense? Not so much. Grade: D

Unsung Hero Award
The Steelers lost four starters in this game, including 2 on offensive line. Yet the unit continued chugging along with backups in the game and for that J.C. Hassenauer and Joe Haeg win the Unsung Hero Award for the tie with the Lions.