It was fun while it lasted. The Steelers responded to their dramatic, comeback win over the Ravens with a 36 to 28 loss to Minnesota Vikings, their most manic depressive performance of a bipolar season. After the game Mike Tomlin minced no words, confirming:

“Just to be blunt, we’re getting manhandled on both sides of the ball… We were JV again tonight.”

Mike Tomlin may have never spoken truer words. But Tomlin’s remarks don’t capture the whole truth, and that’s something to remember. 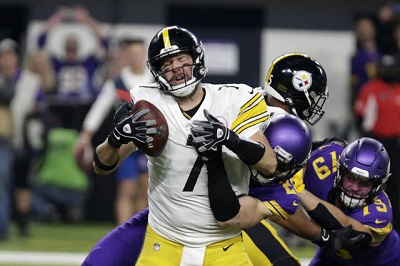 Worst Half of Football in the Tomlin Era? Yep.

Have the Steelers ever played a worse half of football under Mike Tomlin? I argue that the first half vs Minnesota was worse than the putrid 31-3 first half against the Bengals. At least Chris Boswell made his field goal attempt against Cincinnati and Minkah Fitzpatrick intercepted a pass late in the second quarter.

You want a stat to drive this home? Dalvin Cook averaged 16.7 yards per carry on his first seven carries. Ben Roethlisberger was sacked 4 times in the first half and 5 times in the games first 32 minutes. But those numbers don’t do justice to the piss poorness of the Steelers offensive line. This does:

Sheldon Richardson untouched for the #Vikings 5th sack of the day pic.twitter.com/SA8mspWZU7

Arguably Eric Kendricks’ sack of Roethlisberger was worse, but you get the point. Joe Mixon’s 165 yards against the Steelers? Rather pedestrian compared to Davlin Cook’s 205 yards, 29 of which he logged on an untouched trip to the end zone.

Say what you want about the Steelers first half. You’ll get no argument here. Nor will you find here any talk of “moral victories” because of what transpired next. But also be clear:
The Steelers showed incredible heart in the second half.

Football is brutal. Chuck Noll once described training camp as the process of acclimating yourself to using your body as a projectile. That’s unnatural. Such a sacrifice demands a reward.

And that’s why Rocky Bleier and Ryan Clark’s words stung so sharply. In the comeback against the Ravens, the Steelers seemed to earn some redemption, but that redemption appeared a mere mirage for the 42 minutes of the Vikings game.

Then a field flipping catch by James Washington, stout running by Najee Harris and an idiotic taunting penalty by Kris Boyd moved the Steelers into the Red Zone. Ben Roethlisberger and Najee Harris then hooked up to get the Steelers on the board. So, it was 7 to 29, window dressing had been added to the debacle.

The Steelers moved down the field, but appeared to stall on 3rd and goal, only to have Minnesota commit pass interference. The Steelers got 3 more downs, but Najee Harris only needed one of those to score.

Thanks to deep penetration by Cam Heyward and some Minkah magic with a third down pass deflection, the Steelers forced a 3 and out. Roethlisberger responded with bombs to Diontae Johnson and James Washington in the end zone.

The two point conversion failed, and the Vikings answered with a quick touchdown. Minnesota forced a Steelers three and out. Ahkello Witherspoon struck again, this time returning a Kirk Cousins interception 41 yards. It took Ben Roethlisberger 1 play to hit Ray-Ray McCloud for a touchdown. Pat Freiermuth made the two-point conversion.

Long passes to Chase Claypool and smart running by Diontae Johnson gave the Steelers one shot with 2 seconds left from the 12 yard line. Here’s what happened next:

As a football coach friend texted me, “Ben put that ball on a mosquito’s dick.”

In the end, it wasn’t enough thanks to some incredible play by the Minnesota Vikings. The Steelers failed to pull off an improbable comeback. The “almost comeback” doesn’t excuse their awful first half performance and likely cost them a shot at the playoffs.

But at the very least Pittsburgh proved it had not lost its pride.