Taken from the gradebook of a teacher who will miss the man who has been his star pupil for 18 years, here is the Steelers Report Card for the AFC Wild Card Loss to the Chiefs. 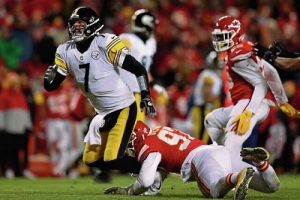 Quarterbacks
Ben Roethlisberger was 4 of 11 (or something like that) at the half and frankly had not played well. He finished the game going 29 of 44 for 215 and two touchdowns. Sure, his last two touchdown drives started from 35 points behind, but you’d never have known that given the way Ben was working the huddle. Grade: C+

Running Backs
Najee Harris did not have a good night, going 29 yards on his 12 carries. Worse yet, his fumble extinguished any chance a Steelers comeback. Benny Snell got work in garbage time and made the most of it. Kalen Ballage got some work too, but didn’t look quite as good. Grade: D

Wide Receivers
When asked if his wide receivers could have stepped up and made more plays, Mike Tomlin’s response was, “Ya think?” Such candor is as brutal as it is uncharacteristic. And it is accurate. Diontae Johnson had several drops, including 1 on third down. Chase Claypool also did not distinguish himself. Sure, some of the passes were not catchable, but reading Roethlisberger’s body language the WR’s were just as much at fault. Grade: F

Offensive Line
The Kansas City Chiefs defense got 7 hits on Roethlisberger and sacked him three times. There looked to be a little push in the running game early on, but that dissipated quickly. A junior varsity performance. Grade: F

Defensive Line
Cam Heyward played well, helping force the fumble and while the unit didn’t get gouged on the ground, it did help give up containment on Mahomes several times and got out foxed in the goal line. Grade: D

Linebackers
T.J. Watt deflected a pass that Devin Bush intercepted and returned fumble for a touchdown. He also sacked Mahomes to save a final score and allow the Steelers to end the game with the ball in Ben Roethlisberger’s hands. Alex Highsmith had a sack. But those Splash plays on that stat sheet mask a unit that got fooled at in the Red Zone once and then gave up touchdowns on two more gadget plays. Grade: D

Secondary
It took Patrick Mahomes 20 minutes to warm up, but then he basically did want he wanted, when he wanted. And the Steelers were powerless to stop him. After the Chiefs scoring run started, Kansas City didn’t punt until there was 4:35 left in the Roethlisberger era. Grade: F

Special Teams
Mecole Hardman had a 48 yard kick off return, but that amounted to nothing as the Steelers intercepted the next pass. Beyond that coverage units were solid and Ray-Ray McCloud did a respectable job of returning. Presley Harvin III punted often and punted well. Chris Boswell was perfect. Honestly, special teams really had no chance to make an impact. Grade: C

Coaching
Mike Tomlin’s response to the first question of the night said it all: “Game plans are irrelevant man. We didn’t execute nearly well enough.”

IT also says here that this game shows that the Steelers did not belong in these playoffs to begin with, confirming that the 3rd Wild Card slot is all money and zero competition. 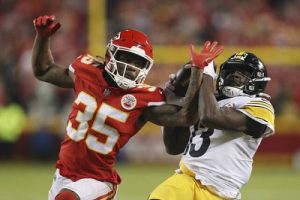 But the Report Card grades on performance and results, and both of those were terrible. Grade: F

Unsung Hero Award
He was invisible for almost 3 quarters. He was only targeted 3 times and made two catches yet still led the Steelers receivers in receiving yardage. While that says more about the rest of the receiving corps that it does him, James Washington was giving his all, making combat catches till the very end and for that he wins the Unsung Hero Ward for the 2021 AFC Wild Card Playoff Loss to the Chiefs.