I was shocked when Steelers receiver Diontae Johnson and rookie running back Najee Harris were named to the Pro Bowl in place of receiver Ja’Marr Chase and running back Joe Mixon, two Bengals players who, instead, will have the privilege of participating in Super Bowl XVI a week later.

What was I shocked by?

Johnson, and not because he was actually voted to the Pro Bowl. He’s a nice receiver and someone that I think could be headed for super-stardom, given the right role, quarterback and an ability to shed his reputation as a receiver with poor hands (other than being considered a diva, I can’t think of a worse reputation for a receiver – think of Dwight Hands of Stone.) 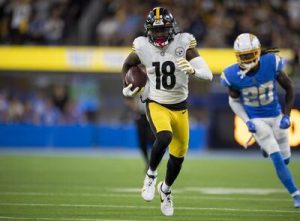 No, the thing that truly shocked me was Johnson’s 2021 stat line that included 1,161 receiving yards and, get this, 107 receptions! No, I couldn’t believe it, either.

I guess I was so surprised by Johnson’s numbers because of the lack of production of the Steelers offense in 2021, a season in which it finished 23rd in total yards, while the team (mostly, the offense) averaged just 20.2 points per game.

It was really one of the worst Steelers offenses I’ve seen in years (maybe decades), which may explain why Diontae Johnson had to wait until the Bengals reached the Super Bowl in order to get the call to play in the 2022 Pro Bowl. It probably also explains why lots of fans were/are ready to move on from Johnson, even as he was putting up career numbers. 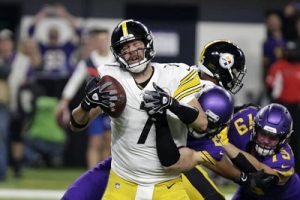 I mean, Diontae Johnson averaged just 10.9 yards per catch, which doesn’t exactly scream big-play receiver. It’s probably not Johnson’s fault that he hasn’t fully developed into a superstar player after three seasons. No, I blame the absence of an injured Ben Roethlisberger for most of 2019 as well as the absence of Roethlisberger’s great skills in 2020 and 2021. I blame a poor offensive line that “encouraged” Roethlisberger to get rid of the football at a faster clip than he ever had before.

As per Pro Football Reference, Johnson’s advanced stats show that Roethlisberger’s passes only traveled 5.9 yards before reaching the young receiver. I don’t know if you believe in advanced stats, but they do show that Johnson’s drop rate, well, dropped to just three percent in 2021, as he only dropped five passes all year.

Of course, reputations being what they are, Johnson will likely carry the reputation as someone with poor hands much longer than he deserves to. Also, it doesn’t help that a few of his drops occurred late in the season and even into playoffs where he dropped a couple of passes in the blowout loss to the Chiefs.

Still, though, 107 receptions used to be a big deal, but I guess it’s a sign of the times that we barely noticed Johnson’s production in 2021, even if it was inflated by many short passes and one extra regular-season game.

I still think Diontae Johnson has a bright future in the NFL, and if he can find the right combination of coaching, quarterbacking and scheming to help in his development as a receiver, there might be a day when we’re shocked when he doesn’t catch 107 passes.