The Pittsburgh Steelers made official what has rumored for weeks, if not years yesterday by promoting Teryl Austin to defensive coordinator. Austin replaces Keith Butler who retired last season after spending 7 years in the role after spending over a dozen as linebackers coach. 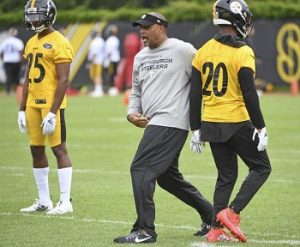 Teryl Austin is native of Shannon, Pennsylvania and a graduate of Pitt who returned to Pittsburgh for the 2019 season to oversee defensive backs and assist Mike Tomlin with replay challenges.

Under Austin’s guidance, the Steelers secondary ranked second in turnovers in 2019 and first in 2020 before dropping to the middle of the pack in 2021. But even 2021’s 22 takeaways were down from previous years, likely due in part to the ease at which anyone with a plus could run on the Steelers defense, is a far cry from the Steelers 2018 effort when the defense posted a meager 14 turnovers.

The Steelers recent improvement in turnovers is certainly more due to the arrival of game changers like Minkah Fitzpatrick and the maturation of T.J. Watt, but the direction under Austin is clear.

Prior to joining the Steelers, Austin coached the defense for the Cincinnati Bengals, were he was fired at mid season  after his unit gave up 3 consecutive 500 yard games. Prior to that, Austin worked as the defensive coordinator for the Detroit Lions from 2014 to 2017 and coached against the Steelers overseeing the Seahawks defensive backs in 2005 in Super Bowl XL and the Cardinals secondary in 2008 in Super Bowl XLIII.

Those weren’t the only coaching moves the Steelers made this week. In a move that caught the Steelers press by surprise, the team announced that Frishman Jackson had been hired as wide receivers coach.

This is notable because, with media access restricted due to COVID-19, no one knew that the Steelers had declined to renew the contract of Ike Hilliard.

To remedy that, Tomin brought Richard Mann out of retirement, and under Mann’s wing, Antonio Brown blossomed into one of the NFL’s best receivers. While Brown remained a handful off the field during this time, he was generally under control. That began to change when Mann retired after the 2017 season giving way to Darryl Drake.

Darryl Drake passed away after just one season as wide receivers coach and was replaced by former Steelers offensive coordinator Ray Sherman.

Under Hillard Diontae Johnson has developed steadily, if unevenly, but Chase Claypool, the Steelers 2nd pick in the 2020 NFL Draft, did not make the coveted “sophomore lead” during his 2nd year.