It seems that the Steelers, the media that covers them, and their fans can’t stop talking about the uncertainty at the quarterback position.

That’s fair. Ben Roethlisberger literally just retired, and the Steelers, the folks that cover them and the fans that support them are in uncharted territory–or at least territory that hasn’t been charted since before Roethlisberger’s rookie season nearly 18 years ago. 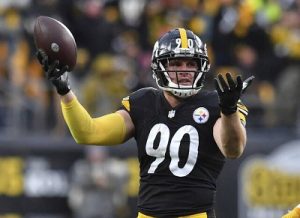 This explains the non-stop speculation and thirst for news regarding a decision that Pittsburgh’s brass really can’t make for at least a month when the NFL’s new calendar year begins along with unrestricted free agency.

But it doesn’t explain the media’s obsession with the words of superstar outside linebacker and newly-minted Defensive Player of the Year recipient, T.J. Watt when he appeared on the AP Pro Football Podcast on the eve of Super Bowl LVI.

Of the many subjects broached was the Steelers uncertainty at quarterback heading into the 2022 offseason and what Watt thought about that. Below is a comment that the media took and spent days trying to mine as much controversy out of as possible:

We’ll see what happens at the quarterback position. I trust the guys upstairs to be able to bring a guy in that can win us some games, and I’m gonna do everything in my power to take care of things on the defensive side of the ball.

You talk about making a mountain out of a molehill, which was also what the media did earlier in the offseason when rookie running back Najee Harris appeared on a podcast and named just about every potential quarterback for the Steelers in 2022 except the ones that were already on the roster–including Mason Rudolph and Dwayne Haskins. 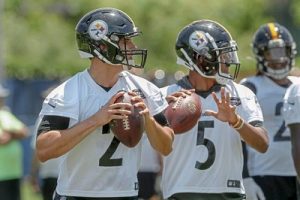 In regards to Mason Rudolph, that’s who the media said t.J. Watt threw under the bus when he said he had hope that the Steelers would bring a quarterback in to help them win next year. This was taken as a disrespectful slight at Rudolph, the 2018 third-round draft pick and the team’s backup quarterback since 2019.

First of all, it’s hard to know for sure what T.J. Watt meant by “bring a guy in.” Watt may actually want his bosses to bring a new passer into the fold, but his comment could have also meant that he trusted the team to find the best possible quarterback — even if that’s Rudolph or Haskins.

After all, T.J. Watt is now the reigning DPOY, which means he’s considered to be the very best player in the NFL on the defensive side of the ball — or at least in the conversation with the likes of Aaron Donald. Is it so wild and disrespectful that Watt wouldn’t believe in Rudolph’s abilities at this point? Rudolph has appeared in 17 games as the Steelers quarterback and has done virtually nothing — he’s completed 236 of 384 passes for 2,366 yards, 16 touchdowns and 11 interceptions — to make anyone but his mom think, “Wow, this is the Steelers future starting quarterback.”

Like any other player in his prime, Watt wants to win now, as do other Steelers greats–including Cam Heyward and Minkah Fitzpatrick. It’s understandable that there would be concern about the immediate future of their franchise when the franchise quarterback of 18 years just retired.

Speaking of Roethlisberger, this Watt “controversy” takes me back to Roethlisberger’s first year and first start early in the 2004 campaign.

The Steelers were heading into a Week 3 showdown against the Dolphins in Miami and were doing so without Tommy Maddox, their starter the previous two seasons, and Charlie Batch, their primary backup, who were both out with injuries.

The Maddox injury occurred in a Week 2 loss to the Ravens, and with Batch unavailable, Roethlisberger was thrust into action a lot quicker than anyone had anticipated. 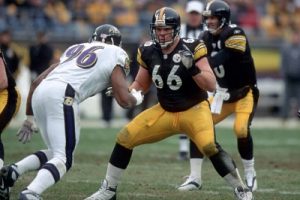 Hall of Fame Guard Alan Faneca was forced to play tackle at times during 2003. Photo Credit: George Gojkovich, AP via the Athletic

Ben Roethlisberger performed well enough that day at M&T Bank Stadium but viewing things in the context of the time, nobody could have envisioned that No. 7 would go on to be perhaps the greatest quarterback in Steelers history while leading them to three Super Bowl appearances and two Lombardi Trophies.

Alan Faneca, a decorated guard in the prime of his career, certainly didn’t think so at the time, and he didn’t mind voicing his opinion to reporters in the days leading up to the game against the Dolphins:

“Exciting?” Faneca said back then in a quote courtesy of 93.7 The Fan.  “No, it’s not exciting.  Do you want to go work with some little young kid who’s just out of college?”

Like Watt and the Steelers, today, Faneca and his veteran teammates probably felt like they were at a crossroads in 2004 in terms of how competitive the organization would be in the coming years. After making it to the playoffs in 2001 and 2002, Pittsburgh sunk to 6-10 in 2003.

Now, thanks to an injury suffered by Maddox, the Steelers would likely have to go with an unknown rookie at quarterback for the foreseeable future.

Obviously, Roethlisberger made history that year by winning all of his starts and leading Pittsburgh to a 15-1 record and an appearance in the AFC Championship Game.

The rookie quarterback had to prove himself to his veteran teammates, which he did in the best way possible.

Of course, I’m not trying to say that Rudolph has the talent to have the same kind of career as Roethlisberger. What I am saying is that he has a lot to prove to not only his coaches and the fans, but to his teammates. He has to earn their trust. He has to prove to them — more than anyone else–that he has what it takes to be their new leader and help them win games and get to where they want to be.

T.J. Watt has earned the right to voice his concerns about the Steelers’ future at quarterback, and if that hurts Mason Rudolph’s psyche, well, he’s just going to have to do something about it and prove himself once and for all.