Protests to the contrary, there are few secrets in today’s NFL Draft. Digital technology and social media make it almost impossible to disguise interest in a player.

Steelers Nation was reminded of this during the 2018 NFL Draft, when the Steelers shocked everyone by drafting Terrell Edmunds in the first round. 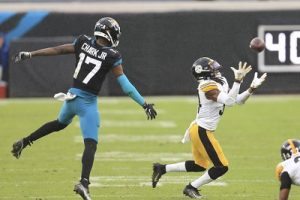 Capsule Profile of Terrell Edmunds’ Career with the Steelers

The pick of Terrell Edmunds might have shocked draft nicks across the NFL, but he became an immediate starter at strong safety which allowed Mike Tomlin and Keith Butler to shift Sean Davis to free safety.

Terrell Edmunds didn’t just start at strong safety, he became a fixture there playing an estimated 93% of defensive snaps in 2018. That percentage leaped to 96 in 2019, “dipped” to 89% in 2020 as Edmunds missed the season finale against Cleveland and but rebounded to 98% in 2021.

If he’s has been a steady presence the field for the Steelers, he hasn’t authored a lot of highlight reel footage, to wit Terrell Edmunds has 5 interceptions on his resume and 3 sacks.

The Case for the Steelers Resigning Terrell Edmunds in 2022

For worse (or perhaps for better) Terrell Edmunds will always be the player the Steelers passed on Lamar Jackson for in the same draft that netted them Mason Rudolph.

No it is not. After four years in the NFL it is pretty clear that Terrell Edmunds isn’t going to be a Steelers safety in the mold of Carnell Lake, Troy Polamalu or Donnie Shell who could alter the course of games in a single play.

And if the ESPN highlight crowd might not recognize Terrell Edmunds, the fact is that he’s gotten better year-to-year and still hasn’t turned 25.

This consistency, along with Edmunds’ low profile should give the Steelers the opportunity to keep him in Pittsburgh at a reasonable second contract.

The Case Against the Steelers Resigning Terrell Edmunds in 2022

The Steelers problems on defense are great and they are many. This team needs playmakers and anyone playing strong safety for the Steelers needs to be able to cover tight ends and be stout against the run.

For whatever the Steelers thought they saw in him that the rest of the NFL missed, it is clear that Terrell Edmunds isn’t a playmaker or a difference maker. The Steelers might have more salary cap space in 2022 that usually do, but Edmunds is a luxury signing for a team that needs to use those cap dollar somewhere else.

Curtain’s Call on the Steelers and Terrell Edmunds in 2022

When the Steelers opted not to pick up Terrell Edmunds fifth year option that put Edmunds into some pretty infamous company alongside Jarvis Jones and Artie Burns, two other defenders the Steelers didn’t option.

True though that may be, the Steelers also had to option Minkah Fitzpatrick which almost certainly weighed on their decision.

He’s been both healthy and consistent since he arrived in Pittsburgh. He knows the system and at age 25 can be a building block to help steer the team through the post-Ben Roethlisberger era. Whether or not that happens will largely come down to a question of just how far below other team’s radars Edmunds really lies.