A second-round pick out of Oklahoma State in 2018, James Washington arrived in Pittsburgh as someone Steelers fans hoped would continue the team’s tradition of excellence at the receiver position that started with Hines Ward many years earlier.

But while James Washington had to initially bide his time behind the likes of Antonio Brown and JuJu Smith-Schuster, he could never quite break through as a breakout star, even after Brown was traded in the 2019 offseason and JuJu Smith-Schuster spent the majority of 2021 — the final year of Washington’s rookie deal — on the Injured Reserve list. As James Washington enters free agency for the first time, the question is, should he and the team continue their relationship? 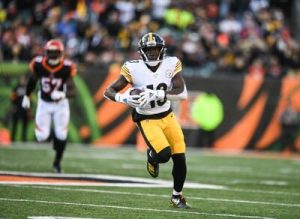 During his rookie preseason, James Washington showed glimpses of the deep-threat and combat-catch receiver the Steelers hoped he would be when they drafted him the previous spring, but, as I alluded to earlier, targets were hard to come by during the regular season, and Washington only caught 16 passes for 217 yards for one touchdown in 2018.

James Washington certainly didn’t endear himself to quarterback Ben Roethlisberger and head coach Mike Tomlin in a late-season loss to the Broncos when he dived and failed to catch a deep pass that, had he stayed on his feet, would have gone for a touchdown. Despite what I said earlier, Washington did seem to initially thrive following Brown’s departure and, believe it or not, he did it while mostly catching passes from Mason Rudolph and Devlin Hodges in 2019, while Roethlisberger was out with major elbow surgery injury. Washington pulled in 44 passes for a team-high 735 yards and three touchdowns — including a 79-yard catch-and-run against the Bengals in which he displayed both his deep speed as well as his physicality by stiff-arming a Cincinnati defensive back on the way to the end zone.

Unfortunately for James Washington, he couldn’t parlay his 2019 success into greater heights over the next two seasons, as he caught a combined 54 passes for 577 yards and seven touchdowns.

The Case for the Steelers Re-signing James Washington in 2022

There’s no question that Diontae Johnson and Chase Claypool are the Steelers’ top two receivers (at least that are currently under contract). With JuJu Smith-Schuster likely set to explore free agency in search of the lucrative multi-year deal he couldn’t find on the open market last offseason, James Washington could finally get his chance to shine as the number-three receiver. He’s not likely to command much once free agency kicks off, and he could probably be retained on the cheap — even on a one-year “prove it” deal.

The Case Against the Steelers Re-signing James Washington in 2022

There were rumblings that James Washington went to his bosses last summer and asked to be traded because he didn’t feel there was room on the roster for him to shine, especially after JuJu Smith-Schuster surprisingly re-signed with the team last March.

James Washington declined to refute those rumors, which probably meant there was likely some truth to them. Also, Washington garnered little playing time over the last 12 regular-season games following the injury to Smith-Schuster. Instead, Ray-Ray McCloud became a bit of a favorite target for Roethlisberger down the stretch.

Curtain’s Call on the Steelers and James Washington in 2022

I’d personally keep James Washington around because, again, I believe he could be had on the cheap.

But it’s probably a moot point, considering he likely wants to go somewhere where he can be more of a focal point for an offense. As Mike Tomlin says, “Its free for us, free for them,” and with that in mind it’s probably best for the two parties to go their separate ways.