Munch’s Millionaires is what they called them. These were unheralded players that Mike Munchak mentored and molded into quality starting NFL lineman who cashed in on that coveted second contract.

Others, such as Chris Hubbard and Matt Feiler found greener pastures outside of Pittsburgh. B.J. Finney was once considered part of this group. And while he did get a second contract, he found that the grass wasn’t always greener on the other side of the NFL and was back with the Steelers in 2021. Will he remain there in 2022? 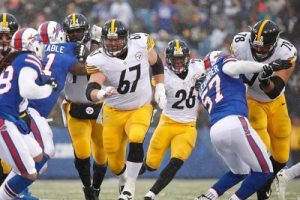 Capsule Profile of B.J. Finney’s Career with the Steelers

Over the next four seasons, Finney would start 13 games while appearing in a total of 59 contests, including the 2016 road game win over the Buffalo Bills where the Le’Veon Bell set the franchise single game rushing record.

The Steelers did not offer Finney a second contract during the 2020 off season, and he instead signed with Seattle, where he mainly played on special teams before getting traded to the Bengals. Ironically, his one game with the Bengals came in their 2020 loss to the Steelers at Heinz Field.

Finney resigned with the Steelers during the 2021 off season, but only saw limited duty, despite a flurry of injures at tackle and later center. Finney did start the Steelers second loss to the Bengals but was injured in the following week’s win against the Ravens and ended the season on injured reserve.

The Case for the Steelers Resigning B.J. Finney

B.J. Finney has been with the Steelers organization for over a half decade. He knows the system, the coaches know him. While he might not be “starter capable” as some of Much’s other pupils, he can step in and play either guard or center.

That, given his low price tag makes it a win-win situation for all sides involved.

The Case Against the Steelers Resigning B.J. Finney

The interior of the Steelers offensive line was as bad as it has been in a generation this past year. And B.J. Finney was not only not good enough to push any of the 3 starters, he wasn’t even the proverbial “Next man up.”

His experience gives him and advantage, but he is on the wrong side of 30. Even though the Steelers have a young offensive line, they could still stand to get younger and certainly must get stronger.

You don’t do that with B.J. Finney.

Curtain’s Call on the Steelers and B.J. Finney

The Steelers have a bit of luxury here. No NFL team is going to wave a lot of money at B.J. Finney. The Steelers can go into free agency looking to add a guard and/or a tackle continue to add to that in the draft, and B.J. Finney will probably still be available in May if they need more depth.