Offensive tackle might not be football’s sexist position, but it is sexy enough for Hollywood to do a full-length feature movie on one (see on the Blind Side.) Arguably, outside of quarterback, tackle is the most coveted position on offense.

Chuks Okorafor has been a tackle for the Steelers for four years. Now he’s a free agent. Will they try to keep him? 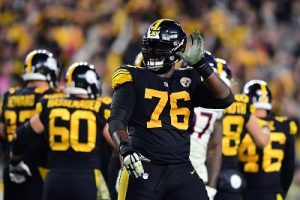 Capsule Profile of Chukwuma Okorafor’s Career with the Steelers

It seems like eons ago now, but when the Steelers picked Chuks Okorafor in the third round of the 2018 NFL Draft, they still had one of the best offensive lines in football. Picking him was seen as the first step towards renewal.

His first start came as a rookie on the road against the Denver Broncos going toe-to-toe with Von Miller and, in the words of David DeCastro “Chuks played his butt off.” His next start came a year later, when the Steelers played the Rams.

And while the Rams did record 3 sacks on Mason Rudolph, including one by Donald, Okorafor acquitted himself well. But since that good start it has not been smooth sailing for Okorafor. Although lost the training camp competition with Zach Banner, he stepped into the starting role after Banner tore his ACL in week 1 against the Giants.

Chuks Okorafor started the rest of the season at right tackle, and entered training camp in 2021 penciled in at left tackle as Alejandro Villanueva’s replacement. His performance there in preseason, along with Banner’s struggles to return to pre-ACL tear from, saw him move back to the right side where he started 16 games.

The Case for the Steelers Resigning Chuks Okorafor

Tackles are very hard to find. And if the Steelers have probably found a good one in Dan Moore on the left side, Zach Banner’s inability to get back on the field after returning to full health, is telling.

Keeping Chuks Okorafor is a way to start establishing stability with a known commodity.

The Case Against the Steelers Resigning Chuks Okorafor’s

The Steelers need to improve across their offensive line, and they don’t do that by keeping Chuks Okorafor. By Roy Countryman’s count at Steel City Insider, Okorafor gave up 11 penalties last year. Even if Pro Football Reference’s count is lower, the number disturbs.

Offensive lineman are among the lowest risk free agents and the Steelers can improve at right tackle.

Curtain’s Call on the Steelers and Chukwuma Okorafor

The real X factor here is Zach Banner. The coaches clearly thought highly of him going into 2020 and 2021, yet he could not earn or reclaim the starting job. Was that because of complications from his injury, or because they were satisfied with Okorafor’s play?

That gives the Steelers the freedom to make the move they feel is best. That means they can safely let Okorafor walk while seeking an upgrade via free agency and/or the draft, with Banner as an insurance policy.