But none of them have proven themselves to be even remotely worthy of the title “Heath Miller’s replacement.” 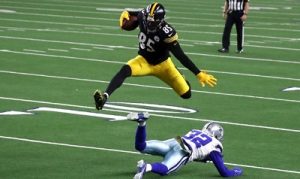 Capsule Profile of Eric Ebron’s Career with the Steelers

In minds many, the narrative on Eric Ebron is that he’s a failed free agent. His record is more complex.

Mike Tomlin likes exceptional athletes and never hesitates to bring one to Pittsburgh, even if he has some baggage (think Mike Vick). Eric Ebron fit the bill, as a 6’4” 253 tight end.

Ebron caught 56 passes for 558 yards including 5 touchdowns. And if even at his best he wasn’t a transformational player, he was effective in the Red Zone where he caught all 5 of his touchdown passes in addition to a 2-point conversion.

When Vance McDonald retired, the Steelers opted to bring Eric Ebron back in 2021. Eric Ebron generally did what the Steelers asked of him – he caught another Red Zone touchdown, but his role decreased and he then missed 9 games due to injury.

The Case for the Steelers Resigning Eric Ebron

The Steelers offense is young and can use a veteran presence and that will be true even if JuJu Smith-Schuster makes another surprise return. Ebron’s athletic talent is real, and he’s a stud the Red Zone. At age 29, this former first round draft pick has already made 3 stops in the NFL and isn’t likely to have many suitors – It won’t break the bank to bring him back.

The Case Against the Steelers Resigning Eric Ebron

The Steelers can get the post-Ben Roethlisberger era off to the right start by establishing a physical presence on offense. You don’t do that with Eric Ebron. Moreover, if there was one spot on the depth chart that finished 2021 on a decided up note, it was tight end.

Eric Ebron’s athletic talents are real, but they’re a luxury that the Steelers neither need nor should want.

Curtain’s Call on the Steelers and Eric Ebron 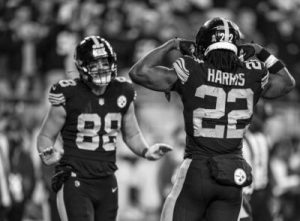 Muuuth! The cry is now spontaneous anytime number 88 Pat Freiermuth makes a catch. Its easiest to hear at Heinz Field, but also audible on the road. The Steelers of course picked Pat Freiermuth in the 2nd round of the 2021 NFL Draft and the rookie quickly established himself as the starting tight end.

In addition, 2021 was also the year where the team’s investment in Zach Gentry began to pay off, as Gentry proved to be a capable number 2 tight end. Fantasy football owners won’t soon get into fights over who has the rights to draft Number 3 tight end Kevin Rader, but Radar’s shown he’s a good blocker.

Suffice to say, the Steelers in good shape at tight end, and while they can certainly get stronger there, bringing back Eric Ebron isn’t one of the ways that happens.