Cornerback is one of the NFL’s most taxing positions to fill. So the Pittsburgh Steelers having sent cornerbacks Jack Butler, and Rod Woodson and Mel Blount to the Hall of Fame have a good track record there. Ike Taylor likely could have joined them, had he been able to hold on to interceptions (outside of his game changing pick in Super Bowl XL).

But since Taylor’s retirement the Steelers have struggled to fill their needs at cornerback, which is why they snapped up Joe Haden when the Browns cut him in August 2017.

The Steelers resigned Haden in 2019, and now that deal is up too. Will the Steelers extend his day in Pittsburgh even further? 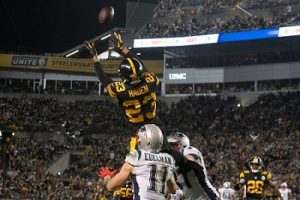 Capsule Profile of Joe Haden’s Career with the Steelers

When Joe Haden arrived in Pittsburgh, he sustained an upswing in the Steelers defense that had begun a half season before. Haden started instantly and became an immediate leader in the locker room and in on the field.

While most people point to Ryan Shazier’s injury as the moment the Steelers defense dipped into decline, the truth is the trouble started with Joe Haden’s injury against the Colts that fall. Haden returned later that year and started for the next 3 seasons, logging 9 interceptions, defending 54 passes, forcing 2 fumbles and even dropping 11 ball carriers for losses.

To understand that look no further than the Steelers 2021 home win against the Titans, were on 4th and 6th with 0:27 at the Steelers 15, Joe Haden stoned Nick Westbrook-Ikhine for no gain sealing the Steelers win.

That one play is Joe Haden’s Steelers career in a nutshell. When the game is on the line, you can count on Joe Haden to make a play.

The Case for the Steelers Resigning Joe Haden

1-9. That’s the Steelers record in games that Joe Haden has missed since 2018. Since Ike Taylor’s “Life’s Work” arrived the Steelers have tried finding corners on the waiver wire, rummaging in through the free agent bargain basement, making trades, drafting them late and developing them or drafting them early.

None of it has worked. The only thing that worked was bringing back departed free agents (see William Gay), and even that was sort of an accident.

Joe Haden changed all of that. His value to the team is clear and he wants to stay in Pittsburgh.

The Case Against the Steelers Resigning Joe Haden

Cornerback is a young man’s game. Joe Haden will be 33 next year. 33 is not young in the NFL and is positively old in defensive back years. The Steelers have Cam Sutton and Ahkello Witherspoon came on strong late in the season.

The 33 year old corner who missed 5 games last year? Or the 27 year old cornerback who had 2 interceptions in his second start and 3 picks in a five game span (oh, and he also tied for the team lead in passes defensed.)

Curtain’s Call on the Steelers and Joe Haden

Joe Haden wanted a contract extensions before the season and wasn’t happy when he didn’t get one. He even thanked “Pittsburg” before Ben Roethlisberger’s final game at Heinz Field, clearly communicating his impression of where he is headed.

Yet, Gerry Dulac of the Post-Gazette indicates that his sources are telling him that the door is open for Haden’s return.

The Steelers would be wise to prioritize signing Ahkello Witherspoon while letting Joe Haden test the market, to see who is ready to pony up for a 33-year-old corner. If no takers can be found, the Steeler would be wise to bring him back at a reasonable third contract, and allow him to serve as a 3rd corner.

He’d be a strong presence off of the bench and in the defensive backs room.