Second contracts separate dollars from cents in today’s NFL. Sure, even undrafted free agent rookies get six figure salaries. But they’re only an injury away from losing it all. Draft picks have more security, but only a little.

If you’re smart with your money and lucky enough to stay healthy, you’ve got a shot at integrational wealth. The Steelers are better than any other NFL team at honoring their second contract commitments, particularly for home-grown players.

Yet, when it comes to wide receivers, only Hines Ward and Antonio Brown have gotten second contracts.

A year ago, JuJu Smith-Schuster was pleading to join them. He got his wish, sort of, and now both sides need to decide whether to reup for a third dance. Will it happen? 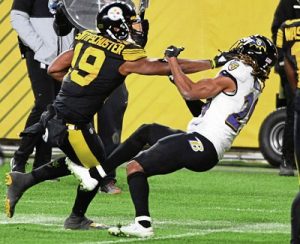 Capsule Profile of JuJu Smith-Schuster’s Career with the Steelers

When the Steelers drafted JuJu Smith-Schuster in the 2nd round of the 2017 NFL Draft, a Twitter fight erupted between Martavis Bryant and Sammie Coates as to who JuJu was arriving to replace. As it turned out, JuJu pushed both men off of the team (OK, Bryant did himself no favors).

JuJu Smith-Schuster had an electrifying rookie campaign, catching 58 passes for just under 1000 yards and included game changing long catches against the Lions and what should have been a game changer against the Patriots. He followed up with 111 catches for 1426 yards in his second season, wining team MVP honors.

Those honors didn’t sit well with Brown, who threw a tantrum and well, you know the rest.

Alas, he might have been ready but the rest of the Steelers offense wasn’t. Ben Roethlisberger’s 2019 campaign lasted 6 quarters as Mason Rudolph and Devlin Hodges slogged out an 8-8 campaign with an offensive line in decline and a running game led by a wounded James Conner and rookie Benny Snell.

Smith-Schuster’s production dipped to 42 catches as he missed four games. He bounced back in 2020 to catch 97 passes, but didn’t get much interested in free agency. He returned to Pittsburgh on a one year deal, but got injured 5 games into the season. JuJu returned for the playoffs, but wasn’t a factor.

The Case for the Steelers Resigning JuJu Smith-Schuster

JuJu Smith-Schuster’s 2021 season only lasted 5 games but the Steelers missed him. As Mark Kaboly reminded before the playoffs, with JuJu the Steelers converted 46% of their third downs.

Go back to 2020 when drops became a chronic issue for the Steelers receiving corps. But not for JuJu, as he easily led wideouts with a 75% catch rate.

JuJu Smith-Schuster is a gamer. He brings a physical presence as a run blocker. He is a leader. The fact that he suited up for the playoffs and risked injury tells you all you need to know about his heart.

The Case Against the Steelers Resigning JuJu Smith-Schuster

JuJu Smith-Schuster’s story is a compelling one, but the Steelers can’t let sentimentally cloud their judgement. Alongside Antonio Brown, JuJu was lethal. Without him, he’s been good but not great. Second contracts for wide receivers clock in at about 12 million per year or more, often with 8 figures of guarantees.

JuJu Smith-Schuster quite simply hasn’t proven he’s worth that kind of investment.

Curtain’s Call on the Steelers and JuJu Smith-Schuster

A year ago, JuJu pleaded to stay in Pittsburgh. That seemed impossible. But when Smith-Schuster only got one year deals, he opted to stay with the Steelers via a home town discount and voidable years.

This year the Steelers have the cap space to consider resigning him, yet JuJu Smith-Schuster doesn’t appear interested, based on his comments about Heinz Field’s locker rooms and some social media posts. But does that mean JuJu’s as good as gone?

A year ago, JuJu thought he’d have more interest in his services yet got few takers. Perhaps that will happen again given how injury ravaged his 2021 season.

Realistically, that seems to be the only way he returns as a Steeler in 2022.