Kevin Colbert may have struggled at drafting cornerbacks but he’s done a pretty good job at bringing them in from the outside. So its logical that when he finds a good one, he tries to keep him. And so it is with Ahkello Witherspoon whom the Steelers resigned to a two year contract. 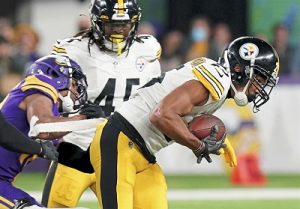 The Steelers traded for Ahkello Witherspoon just before the season’s start, and then sat him for the better part of the first half of the season.

However, an injury to Joe Haden and struggles by James Pierre led to Witherspoon joining the line up and once there he turned heads. As observed here in Witherspoon’s free agent profile:

Despite only playing in 9 games and making 3 starts, Ahkello Witherspoon led the team in interceptions and tied Cam Heyward for passes defensed.

He also brings something else back to Pittsburgh that’s vital at the cornerback position: Youth.

Like fellow starters, Cam Sutton and new arrival Levi Wallace, Ahkello Witherspoon will by 27 in 2022, which should put him right in his athletic prime. Terms of Witherspoon’s contract haven’t leaked yet.

If that’s the case its almost certain that Witherspoon tested the market and realized that grass wasn’t greener outside of Pittsburgh. With Witherspoon’s return is a welcome development, the Steelers decision to bring him back along with their signing of Levi Wallace almost certainly ends Joe Haden’s time in Pittsburgh.

Pittsburgh’s aggressiveness in free agency this spring has been unprecedented. They’ve signed 3 offensive lineman, a defensive lineman and found an inside linebacker to pair with Devin Bush, while tendering two backups behind time.

And that leaves a gaping hole at safety. No, really it does. If the season started today either Marcus Allen would need to move back to safety or the Steelers would need to start Tre Norwood there.

Yesterday social media had reports of Tyrann Mathieu coming to Pittsburgh, and fans clearly think that’s a good idea. Terrell Edmunds remains unsigned. Either way the Steelers need to make a move, or otherwise they’re committing themselves to picking a safety early in the 2022 NFL Draft.