The Pittsburgh Steelers signed linebacker Genard Avery from the Philadelphia Eagles to a one year contract, simultaneously shoring up outside linebacker depth and feeding the hand that slapped them once again.

The need to add depth behind T.J. Watt and Alex Highsmith is obvious. Feeding the hand that slapped you requires exercising your memory muscle a bit. 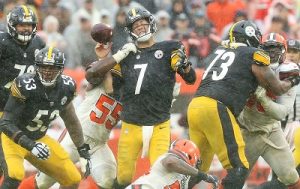 Rewind to a moment that you’ve tried hard to forget – the 2018 opening tie against the Cleveland Browns. Anyone remember why that game ended in a tie? Ball security. The Steelers fumbled twice, late in the game.

Avery caused one of them when he strip sacked Ben Roethlisberger at the tail end of over time, and only a T.J. Watt field goal block saved the game for Pittsburgh. (And this wasn’t the only time Avery made plays that hurt the Steelers, as Jim Wexell pointed out on Steel City Insider.)

Note players on all 31 NFL teams who on their rookie contracts: If you want to play in Pittsburgh, make a big play that hurts the Steelers.

Yes, feeding the hand that slapped them is becoming trend in free agency this year. Myles Jack’s interception in the Steelers 2017 playoff loss to the Jaguars at Heinz Field put Jacksonville up 14-0 and Pittsburgh firmly behind the eight ball.

The team also signed Levi Wallace, whose interceptions of Devlin Hodges and Ben Roethlisberger helped the Bills seal wins over the Steelers in both 2019 and 2020. On offense the Steelers signed Mason Cole, who was Minnesota’s starting center on an offensive line that humiliated the Steelers defense for over 200 yards rushing.

Yes, Mike Tomlin certainly has an keen eye and a long memory for men that make big plays agaisnt him.

Despite authoring their most aggressive free agency period in franchise history, the Steelers still have not made a move at safety. Terrell Edmunds remains unsigned, effectively leaving Tre Norwood as the starter along side Minkah Fitzpatrick.

There are a number of unsigned free agent safeties at the moment, and its not too much of a leap to suggest that there’s a quiet game of chicken going between agents and general mangers – once one domino falls expect others to fall quickly.