How’s the saying go? Don’t slap the hand that feeds you? Well, maybe in Pittsburgh they’ll have to start saying, “Feed the hand that slaps you.” The Steelers have reportedly come to terms with Buffalo Bills cornerback Levi Wallace, who is expected to sign a 2 year 8 million dollar contract on Wednesday.

Levi Wallace entered the NFL as an undrafted rookie free agent out of Alabama, who made the Bills 2018 practice squad only to be activated and start the last 7 games of the season. He started all 16 games of the 2019 season, followed by 12 starts in 2020 and 17 starts in 2021.

That has given Mike Tomlin an excellent chance to see Levi Wallace up close, perhaps a little too close, as Wallace made interceptions in his first two outings against his future employer. 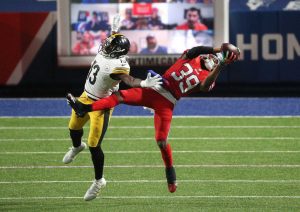 At 4 million dollars a year the Steelers are getting Wallace at an extremely good contract.

Be that as it may, the fact that the Steelers are targeting cornerback as a priority signing also likely spells the end of Ahkello Witherspoon’s and/or Joe Haden’s time in Pittsburgh. The Steelers also have Cameron Sutton, James Pierre and Justin Layne under contract at cornerback.

Steelers Get 4th Round Compensatory Selection

The Steelers were also informed by the NFL that they would be getting a 4th round compensatory selection. Last spring the hope was that given the loss of Bud Dupree and Mike Hilton, the Steelers might get either a third round selection or perhaps multiple selections.

The Steelers have the first 4th round compensatory pick, and now have a pick in each round, save for the 5th round.