It wasn’t long ago that the Steelers appeared to have things locked down at the cornerback position, so to speak. For a short spell, Joe Haden and Steven Nelson were good-to-great starters on the outside, while Mike Hilton was one of the best slot corners in the NFL.

Mike Hilton was the first to leave, as he signed a deal with the Bengals at the onset of the 2021 free-agency period. Not long after that, Nelson was released due to the salary cap hell the Steelers found themselves in last spring.

Joe Haden was the only one left from that accomplished trio. But as of this writing, it appears that the Steelers have officially moved on from Haden, 33, who is an unrestricted free agent and has yet to sign with Pittsburgh or anyone else. 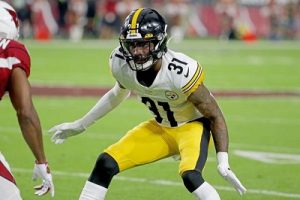 Steelers Depth Chart @ Cornerback Before the 2022 NFL Draft: The Starters

Late last summer, right before the start of the regular season, the Steelers acquired Ahkello Witherspoon in a trade with the Seahawks. Witherspoon was a third-round pick by the 49ers in the 2017 NFL Draft. Witherspoon started 33 games during his four years in San Francisco before signing a one-year deal with Seattle last spring. Witherspoon was barely a factor for the Steelers for the majority of the 2021 campaign, but he started to earn starting reps down the stretch as a replacement for James Pierre and was arguably the team’s best cornerback at the end of the season.

Ahkello Witherspoon agreed to terms on a two-year deal with the Steelers in March and figures to be one of the starting outside corners in 2022.

Speaking of free agents and two-year contracts, the Steelers signed Levi Wallace, formerly of the Bills, to a two-year deal at the beginning of free agency. Wallace, an undrafted free agent in the 2018 NFL Draft, became a full-time starter in Buffalo by his second season and remained in that role through 2021. Playing opposite the highly-decorated Tre’Davious White, Wallace was a solid number two corner for the Bills and figures best suited for that same role in Pittsburgh.

Cam Sutton, a third-round pick out of Tennessee in the 2017 NFL Draft, spent his first four seasons serving many roles in the secondary, playing on the outside, in the slot and even at safety. But Sutton finally got his break and promotion in 2021, in addition to a new contract, and became a full-time starter. Again, Sutton is extremely versatile but perhaps seems destined to start in the slot in 2022, with the re-signing of Witherspoon and the addition of Wallace.

Steelers Depth Chart @ Cornerback Before the 2022 NFL Draft: The Backups

James Pierre, a 2020 undrafted free agent out of Florida Atlantic, struggled in 2021 after earning the most significant playing time of his short career.

After being selected in the third round of the 2019 NFL Draft, Justin Layne has done very little to prove he even has what it takes to be a backup cornerback, let alone a starter.

Veteran Arthur Maulet, an undrafted free agent formerly of the Saints, Colts and Jets, made Pittsburgh’s roster last year and was a steady contributor in the slot.

Rounding out the Steelers depth chart at cornerback are Linden Stephens and Isaiah Johnson.

When talking about the Steelers’ three starters, the consensus seems to be that they are all solid number two caliber corners.

That’s a good number, but is that enough, even with a consistent and dominant pass rush? When you factor in the underwhelming depth behind those top 3, I would categorize the Steelers’ draft need at cornerback as Moderate-High