Perhaps no area on the Steelers roster has seen more turmoil over the last 5 years than inside linebacker. That turmoil began with Ryan Shazier’s injury which set off a series of free agent signings, draft day trades, surprise retirements, training camp trades and more free agent signings.

The question is, have the Steelers done enough to address this position, or must they again dedicate draft capital in the position in 2022? 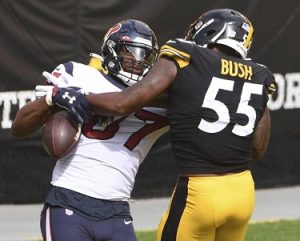 Steelers Depth Cart at Inside Linebacker: The Starters

3 years ago, before COVID-19 changed our world and Ben Roethlisberger’s elbow surgery accelerated the arrival of his “Life’s Work” Kevin Colbert made a mammoth trade to get Devin Bush.

Devin Bush started his Steelers career with a bang. As a rookie he made 2 interceptions, recovered 4 fumbles and had a sack, while making 109 tackles. More importantly, he did those at critical moments in games, including his touchdown against the Chargers and his forced fumble against the Bengals that Minkah Fitzpatrick recovered, turning the tide in a critical division game.

Bush was back, starting throughout 2021, but he was clearly not the same player. While he did make two sacks and forced a few fumbles, his tackle count was only 79, a sharp drop off from his rookie year.

Expected to start alongside Bush in 2022 is Myles Jack, a free agent signing the Steelers made from the Jacksonville Jaguars. Jack brings the Steelers 82 starts worth of experience and should provide much needed stability.

Behind Bush and Jack, the Steelers have Robert Spillane and Marcus Allen, both of whom are returning as restricted free agents. Robert Spillane stepped in for Devin Bush in 2020 and performed far better than anyone had a right to expect.

However, during the 2021 preseason, he struggled in pass coverage, leading the Steelers to trade for Joe Schobert, whom they’ve subsequently waived. Marcus Allen is a converted safety playing inside linebacker who has seen little more than spot duty at his new position. Ulysees Gilbert III is also in the mix, as the 2019 6th round pick finally got healthy enough to see some playing time in 2021.

Finally, the Steelers have Buddy Johnson. The Steelers drafted Johnson in the 4th round of the 2021 NFL Draft, but he only saw spot duty in 2 games.

The Steelers 2022 Inside Linebacker Draft Needs

What do the Steelers really have in Devin Bush?

Is Devin Bush’s ACL injury, like Rod Woodson’s before him, one of those ACL injuries that takes over a year to heal completely? Or did the Steelers misjudge his talent? Or is it a compilation of both?

Looking beyond Bush, the Steelers also need to ask whether Buddy Johnson can make the 2nd year leap. Given that he was a 4th round draft pick, he wouldn’t have been expected to contribute much, but the fact that Johnson didn’t play much on special teams is worrisome.

Given that Myles Jack is playing on a two year contract and that Devin Bush and Robert Spillane are playing on their final years, the Steelers need at inside linebacker should be considered Moderate-High.